Ruger Blackhawk New Model – the flagship of all SA Rugers 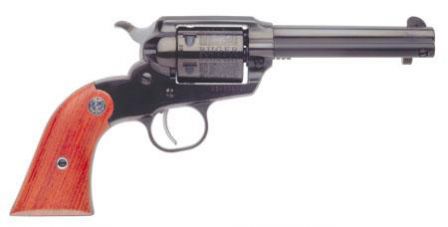 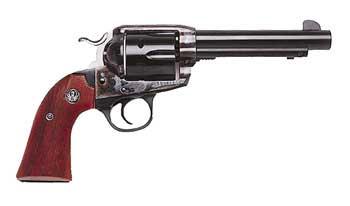 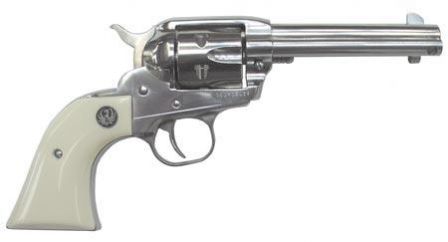 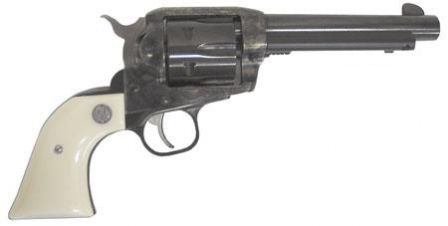 When "Western Craze" hit the TV and movie screens in 1950s, William Ruger found a new business niche. By the 1950s almost everyone was thinking that Single-action revolvers are dead – even the Colt dropped their famous SAA "Peacemaker" from production. But Ruger thought differently, and in 1953 he introduced his first SA revolver – a Ruger Single-Six, chambered for .22LR. This gun followed the shape of the original Colt SAA, but used modern lockwork with coiled springs and frame made by precision casting instead of machining which resulted in lower production costs. In the 1955 Ruger announced his next SA gun that quickly become the flagship of all SA Rugers – the Blackhawk in .357 Magnum. next year Ruger announced the .44 Magnum Blackhawk. Both guns were a total sucess, and both currently known as Old Models, "flat tops" or "three screw" models. "Flat Top" comes from the flat topstrap ahead of the ajustable rearsighs. "Flat tops" were made until 1962, and after that all ajustable sight SA Rugers have had top-straps with raised protective rear part, just ahead of the sights. In 1958, Ruger announced the Bearcat – a small-framed SA, chambered for .22LR. Bearcat had single-piece aluminium alloy frame and was, thus, much lighter and comfortable to carry than Single Six. In 1959, came the biggest of the SA Rugers – Super Blackhawk. Super Blackhawk had bigger and stronger frame made entirely of steel and it was chambered for powerful .44 Magnum and .45 Colt cartridges. It also had easiliy distinguishable square-backed triggerguard. Early Blackhawks were also available in .30 carbine, .41 Magnum and .45 Colt (all guns had same frame as .44 Magnum Blackhawks, which was slightly bigger than frame of .357 magnum ones).

In 1973 Ruger announced New Model Single Action revolvers. All previous guns had no special safeties agains incedential ignition of the cartridges in the chamber under the hammer, so the only safe mode of carry was with the 5 rounds in the 6-chamber gun, with empty chamber under the hammer. New Model SA Rugers have patented transfer bar safety, which allows to carry all 6 chambers loaded. This invention applied not only to the new production models – Ruger designed his new action so it could be installed also in Old Model frames, and Ruger factory still offers installation of the new model action in old guns for free (see www.ruger-firearms.com for details).

In 1985 Ruger offered new variation of the SA theme – Ruger Bisley. This gun had Colt "Bisley" model – like grip frame and was initially available in chamberings from .22LR to .45LC.

In 1993 Ruger announced a fixed-sighted SA revolver, named Vaquero. Vaquero in Spanish means "cowboy", and this gun obviously intended for growning sport of the Cowboy-action shooting. Vaquero revolvers available in .357 Magnum, .44-40, .44 Magnum, and .45LC. A combination of the Bisley frame and Vaquero fixed sights was a logical step, and this has been done in 1998 with Ruger Bisley-Vaquero models, available in .44 Magnum and .45LC.

In general, all Ruger Single Action revolver are quite similar. All SA Rugers (except the Bearcat) had two-piece frame with separate grip frame; Bearcat (both Old and New models) revolver had single piece frame. Frames could be made from steel or aluminium alloy (grip frames on some models). All SA Rugers have coiled main springs and frame-mounted firing pins, and all New Model guns also featured patented transfer bar safety which allows the hammer to strike the firing pin only when trigger is pulled completely. All revolvers have cylinders with 6 chambers. Loading and unloading is commenced via the loading gate at the right side of the frame. Fixed spring-loaded ejector rod is mounded below the barrel and to the right. Cylinder is freed for loading simply by opening the loading gate, unlike the traditional SAAs where cylinder is freed by placing the hammer to the half-cock position.

Most of the SA guns have micrometer ajustable rear sights, except for Bearcat, Single Six and Vaquero and Bisley-Vaquero models. Early Single Six revolvers had blade-type rear sights, all other fixed-sighted models have the rear sights in the form of the groove on the topstrap. Ajustable-sighted versions of the Single Six and Bearcat are named Super Single Six (first appeared circa 1964) and Super Bearcat, respectively.

In general, Ruger SA revolvers offer the best value for single action shooter, giving the versatility and extreme reliability for any use – cowboy-action shooting, hunting, plinking, target shooting. From what i know, even some police departments in the USA issue Blackhawks as a duty guns, which is really funny indeed.