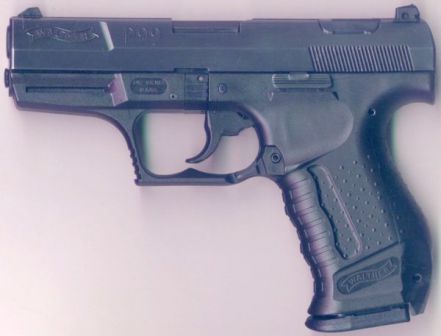 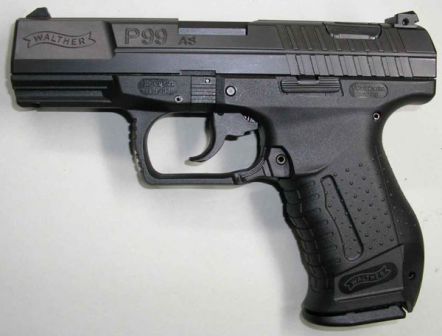 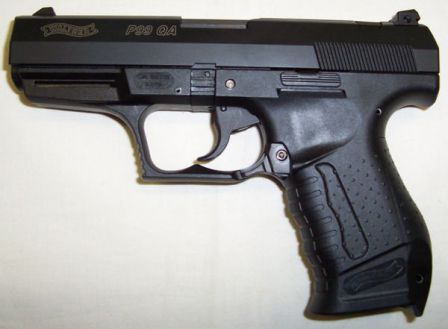 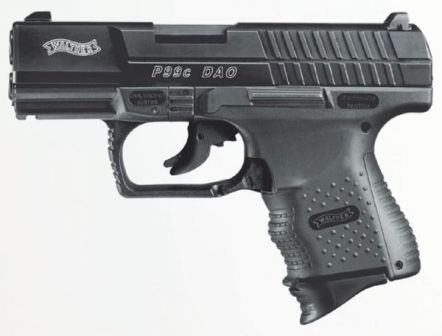 The P99 pistol was a rather radical step forward for the Walther company, made under new management. The development of a new pistol started in 1994 and the first production pistols were shown to public in 1997. The earliest pistols were made in 9mm, and a .40 S&W version appeared in 1999. By 2004, the Carl Walther company presented the second generation of the P99 pistols. These new guns had even better ergonomics, and new model designations – the old P99 was renamed (and slightly redesigned) to P99AS (Anti-Stress), the double-action only P990 turned into the P99DAO, and only the P99QA (Quick Action) retained its name. The second generation also included the P99 Compact pistols, apparently made with input from American company Smith & Wesson, as the basically similar SW99 Compact pistol appeared on the US market a little earlier. Smith & Wesson makes a close copy of the P99 as the SW99, using Walther-made polymer frames and its own slides and barrels of slightly different shape. S&W also makes a .45-calibre version of this pistol. 9mm P99 pistols also are manufactured under Walther’s licence in Poland, and are standard police sidearms there.

The Walther P99 is short-recoil operated, locked-breech pistol. It uses a modified Browning locking system, with the barrel engaging the slide with a single large lug entering the ejection window. The frame is made from polymer and has interchangeable grip backstraps. Three backstraps of different shape are included with each pistol, so users can adjust the grip to their own preferences. The trigger is striker-fired, with an automated firing pin block safety, and varies with the model. The standard P99 is double / single action with a decocking button. Earlier P990s and current production P99DAOs are double action only, and the P99DAO also features a slightly different automated safety built into the trigger. The third variation of the P99 family is the P99QA, which features a partially pre-cocked trigger for a constant trigger pull from the first to the last shot. One feature, unique to the P99 series pistol triggers, is that despite being striker-fired, these pistols do not require the user to press the trigger during disassembly to disconnect the sear from the firing pin. This is done by using the decocking button, built into the top of the slide. This button is relatively large on the standard P99, as it is routinely used to decock the striker, and much smaller on the P99QA, as it is used only during disassembly to disconnect the firing pin from the sear. The P99DAO does not have such button, as its firing pin is always disconnected from the sear and at rest, except for the time the trigger is being pressed. The most recent Anti-Stress feature is, in fact, a modification to the trigger system which makes the trigger pull for the first shot in Single Action mode much longer than for subsequent shots. The Anti-Stress feature is activated each time the pistol is reloaded. Another safety feature is a striker cocking indicator, made in the form of a small pin, which protrudes from the back of the slide when the striker is cocked. First generation pistols had a slide release only at the left side of the frame, second generation guns may have optional ambidextrous slide stop release levers which, combined with ambidextrous magazine release levers built into the base of the trigger-guard, make these pistols truly left-hand friendly. All variations of the P99 use adjustable rear sights with white inserts. Magazines are of double-stack design.

How to field-strip (disassemble) Walther P99: 1) remove the magazine by pressing the magazine release button; 2) check that the chamber is empty; 3) on P99, P99AS and P99QA, press the decocking button; 4) press down and hold the disassembly sliders, located at either side of the frame, above the trigger; 5) push the slide forward and out of the frame; 6) remove the return spring assembly from below the barrel; 7) remove the barrel from the slide.
Reassemble in reverse order.