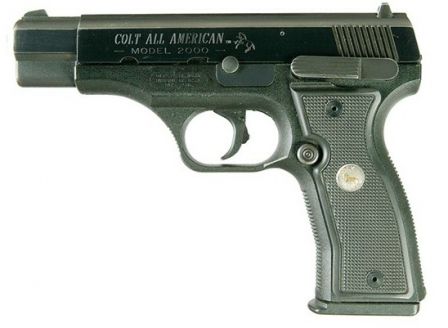 The All American 2000 pistol was designed by the Reed Knight, Jr. and Eugene Stoner (of M16 fame), at the time both working at Knight's Armament Co. The design of the Knight's Model 2000 pistol has been purchased by Colt in attempt to bring to the market a more or less up-to-date 9mm design, suitable for police use. However, the pistol, as brought to the market in 1991, was plagued by serious reliability and safety issues, combined with very heavy and creepy double action only trigger. Two types of Model 2000 pistol were made, with polymer or aluminium frames, and neither sold well. As a result of poor sales, and in the view of coming bankruptcy, Colt discontinued the All American 2000 in 1993, so the initially advertised .40 and .45 caliber versions never came up.

All American 2000 is short recoil operated, locked breech design that uses rotating barrel locking. Barrel have five radial locking lugs that securely engage the slide; upon recoil, a separate lug on the underside of the barrel follows the cam-shaped cut in the frame insert, and thus rotates barrel to unlock from the slide. Trigger is of double action only type, striker-fired, with automatic trigger safety. Despite the obvious attempts to improve the trigger pull by introducing roller bearings to the design, this pistol had a very poor (heavy, long and uneven) trigger pull, resulting in poor accuracy. Magazines were of double stack design, magazine release button located at the base of triggerguard. Sights were fixed, rear sight blade dovetailed to the slide.