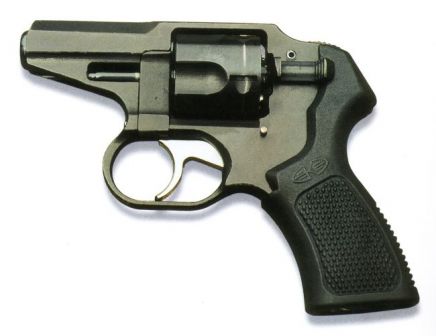 The R-92 revolver was designed circa 1992 by the Instrument Design Bureau (KBP) in Tula, Russia, in an attempt to provide Russian police and private security personnel with a compact, easily concealable weapon which is simple and reliable to use. It seems that, similarly to other contemporary Russian revolvers, it didn’t manage to gain any significant acceptance for official use (despite being formally adopted by the MVD for service in 1994). Only the ‘private security’ version, chambered for 9×17 Browning ammunition, was manufactured to any significant numbers. This revolver has a somewhat unconventional appearance, with trigger and grip moved further forward than usual in an attempt to make the gun more compact.

The R-92 revolver is a more or less conventional double-action revolver with semi-exposed hammer (which protrudes from the frame at the top, allowing it to be manually cocked or de-cocked) and side-opening cylinder that holds 5 rounds. Since the ammunition intended for this revolver is rimless, cartridges are loaded into a flat steel clip prior to loading into the cylinder. Loading and extraction is performed using this clip, which holds  all 5 rounds at once.