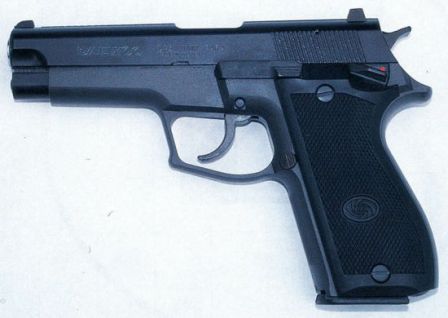 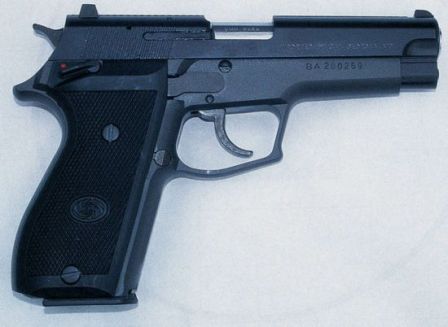 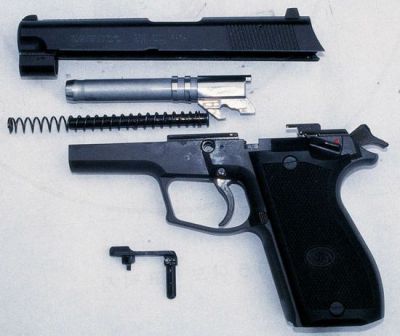 In the 1990, after the excessive trials, South Korean army adopted the first domestically designed 9mm pistol, the K5. Developed and manufactured in Korea by the Daewoo Precision Industries branch of the Daewoo Corporation, the K5 pistol is now standard sidearm of the armed forces of South Korea. It is also offered for export in several modifications and calibers. The basic 9mm K5 is sold as Daewoo DP-51, its compact variant is sold as DP-51c, and the variant in the .40SW is sold as DH-40. These pistols are well made and shoot well.

Daewoo K5 / DP51 pistol is short recoil operated, locked breech weapon. It uses a conventional Browning-type locking system, with two lugs on the barrel engaging cuts inside the slide. Locking and unlocking is controlled by the cam-shaped lug at the bottom of the barrel. Frame of the pistol is made from aluminium alloy; all other parts are made from steel. Trigger is of “triple action” type. This means that other than traditional double or single action fire modes it has “fast action” mode, apparently borrowed from FN’s GP “Fast Action” pistol. In this mode hammer is cocked by the cycle of the slide, then it is pushed forward by the pressure on the hammer head. In this position, the main spring remains cocked, so only light pressure on the trigger is necessary to recock the hammer and fire the gun in the “double action manner”. Or, alternatively, hammer can be recocked manually to be fired in single action for maximum first-shot accuracy. Sights are fixed, with the rear sight dovetailed to the slide. Magazines are of double stack type; proprietary magazines holt 13 rounds, but DP-51 also can use Smith-Wesson 5906 magazines, which will slightly protrude from the bottom of the grip.

Manual safety:Ambidextrous levers at both sides of the frame, above and behind grip panels. To set on safe: pull the lever up. To disengage safety: pull the lever down; red dot will appear on the frame.