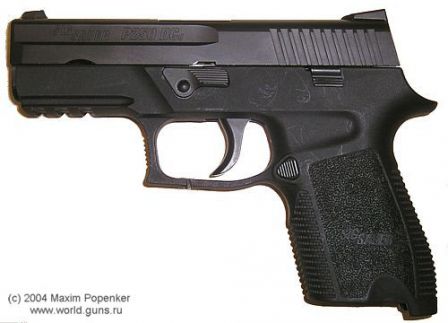 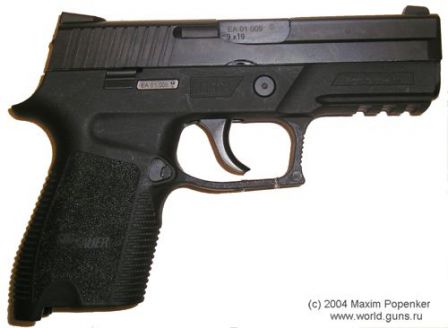 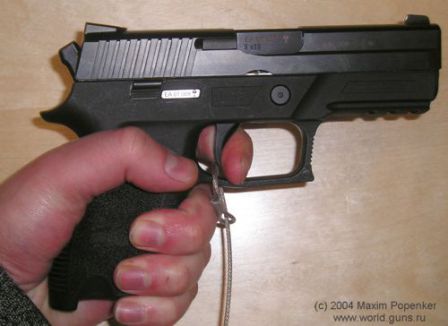 SIG-Sauer P250 DCc (compact) in the hand. Trigger is pulled partially, and the bobbed hammer is visible at the rear of the slide. 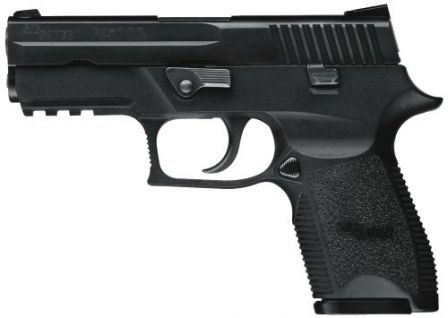 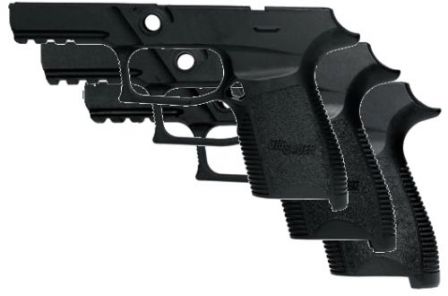 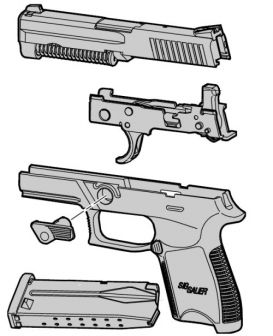 Diagram showing modular nature of the SIG-Sauer P250 pistol. The receiver unit in the center (with slide rails and trigger / hammer) is the main part of the design, which accepts all other interchangeable modules.
image© SIG-Sauer

The SIG-Sauer P250 DC is the most recent addition to the famous SIG-Sauer line of pistols. First announced at the IWA-2004 exhibition in Nurnberg, Germany (March 12-15, 2004), this pistol then faced almost 4 years of continued development, which was a combined effort of German engineers at J.P.Sauer and American engineers from SIGARMS. The gun was re-introduced in late 2007, and is now (February 2008) available in single caliber (9mm), single frame size (compact) and three grip sizes (S – small, M – medium and L – large). Other calibers and barrel / frame sizes are to be announced later. The key feature of the P250 is its complete modularity – using a variety of barrel / slide and frame combinations any user will be available to assemble any conceivable configuration, using the steel serialized receiver as the central assembling point. This will be most useful for large police departments of security companies which will be able to tailor their pistol inventory for various tactical needs (compact pistols for concealed carry, full size pistols for holster carry, various calibers) and for various shooters (variety of grip sizes for each frame configuration), yet have only one pistol type with unified training and maintenance procedures.

The SIG-Sauer P250 DC pistol was developed and is now produced by the famous German arms manufacturer, the J. P. Sauer & Sohn Ges.m.b.H., which is a part of the international SIGARMS corporation. Development of the pistol started circa 2001. The P250 was designed according to the latest official German guidelines for police pistol.

The SIG-Sauer P250 DC is a short recoil operated, locked breech pistol. It uses typical SIG-Sauer cam-operated barrel, which locks into the ejection port on the slide. The frame is made from high impact-resistant polymer. A steel receiver unit is inserted into the frame and held in place by the axis pin of the disassembly lever. The receiver is the only serialized part of the gun, and it contains frame rails and a fire control unit (trigger, hammer and all necessary linkage and springs). Single receiver unit will accept any frame size and any caliber kit (consisting of the barrel and slide). The slide stop levers are located on both sides of pistol. The SIG-Sauer P250 DC has a Double Action Only trigger with spurless hammer, and no manual safeties. The automated firing pin safety prevents the accidental discharges if gun is dropped or roughly handled. The trigger system has a very short trigger reset in DAO mode (about 3 mm or 1/8"), and the trigger pull is constant and consistent, with pull weight about 4 kg (9 lbs). SIG-Sauer P250 DC is fitted with combat-type sights with three white dots, and the frame has an integral Picatinny rail for flashlights or laser pointers.