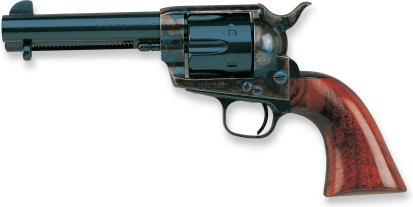 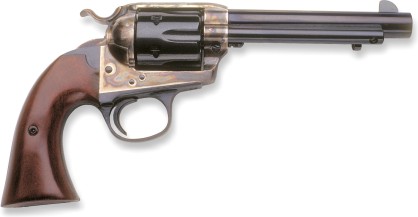 The Colt model 1873 revolver, universally known as the Colt Single Action, Peacemaker, or Frontier, is one of the most popular and legendary small arms in USA. It is also one of the longest living production small arms, being produced for some 130 years and still popular. The Colt 1873 was actually developed by the 1872, based on the patents granted to Charles B. Richards (cartridge conversion of the open-top percussion Colt revolvers) and W. Mason (improved ejector). In 1873, US Army adopted this revolver along with its black powder centerfire cartridge of .45 caliber, and issued it to troops in 2 models. The Army / Cavalry model had a 7½ inch barrel, and the artillery model had 5½ barrel. Both were chambered in .45 Colt (also known as .45Long Colt or .45LC). For the civilian market, Colt also initially produced same gun in .44-40 WCF and .32-20WCF, later adding more modern chamberings like .38 S&W Special (.38Spl), .44 S&W Special (.44Spl), .357 Magnum, .22LR. Civilian guns also were available in various barrel lengths, varying from 4¾ and up to 12 inches. There also was a Bisley model, which appeared near the turn of the centuries. Colt Bisleys were intended as a target guns, and had hammers with wider and lower spurs, and a different grip frame.

US Army bought about 37 000 Colts of both Artillery and Cavalry flavors during period from 1873 and until 1893. Commercial production was ceased in 1941, with the outbreak of the World War 2, with about 370 000 guns made total. In 1956, following the popular demand for "Wild West" era guns, raised by the TV and movie "Western" films, Colt brought the Single Action back to production and still makes it. Other than Colt, several US and foreign companies also made more or less exact copies and clones of the legendary "Peacemaker", for Cowboy action shooting, hunting, general plinking and collecting.

So called "First generation" Colts were made from 1873 and until 1941. These guns can be recognized by the serial numbers below 357860 and with no letters. With the re-introduction of this gun by Colt in the 1956, the "Second generation" of the SAA came into existence. The second generation guns have serial numbers in the range from 0001SA to 73319SA. Production of the second generation SAA revolvers was ceased in 1974, but, in the 1976, with the introduction of newer machinery and production techniques, Colt brought the SAA back in the "Third generation". Third Generation Colt Single Action Armies have been originally offered in .45 Colt, .44 Special, .44-40 and .357 Magnum. By the 1981, Colt dropped the SAA out of production again, and for some time the legendary "Peacemakers" were available only as an expensive custom shop offerings. At the present time, Colt again offers these guns as regular products, in the .45LC, .357Mag and .44-40, and in all standard barrel lengths.

Technical description.
the Colt M1873 is a single action, six shot, solid frame revolver (as opposed to the earlier "open top" Colts or "hinged frame" S&W's). The frame actually is made from 2 parts, the cylinder frame, and the grip frame with the triggerguard, which are assembled by set of screws. The cylinder is loaded by single rounds, via side-swinging loading gate, located at the right side of the frame. Empty cases are ejected one by one, through the opened loading gate, by pulling back on the ejector rod, located under the barrel and to the right. The gun can be loaded and unloaded only when the hammer is set to half-cock position. Cylinder can be removed for cleaning and inspection by unscrewing the base pin screw, and then by pulling out the base pin (cylinder axis) forward and out of the frame.

Since this handgun has no special drop-proof safeties, it is strongly recommended that it should be carried with the empty chamber under the hammer (with only 5 rounds loaded). To achieve that, use the following loading procedure: Starting with the empty cylinder, load one chamber; skip one; load remaining four chambers. Now you got loaded gun that can be carried reasonably safely (when not cocked, of cause). Most versions of SAA had fixed sights. Grip panels could be wooden, rubber or ivory.