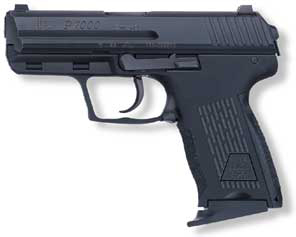 The P2000 is the latest HK pistol, a derivative of the USP Compact, intended for police use. It is available since 2001.

The P2000 is a recoil operated, locked breech pistol, with modified Browning High Power style barrel to slide locking, and with buffering built into the recoil system, similar to the HK USP pistols. P2000 has polymer frame with intercangeable backstrap inserts (somewhat like the Walther P99), to allow ajustment of the grip to the hands of diferent sizes. The gun is externally sahped to be carried concealed with maximum comfort. P2000 also feature underbarrel acessory rails.

The CDA trigger group featured HK patented, hammer fired system with two piece hammer. Inside the conventional, DAO hammer there is a cocking piece wich acts like SA concealed hammer, and can be cocked via the retraction of the slide, along with the hammer. When the slide goes back into the closed position, the external hammer goes down like any other DAO hammer, under the its own hammer spring, but cocking piece remains in the cocked position, with main spring loaded. When operator pressed the trigger, it goes all the way back, but due to the low power of the hammer spring, the trigger weight is much lower than in conventional DAO pistols (three weights available – 2 kg, 2.8 kg or 3.3 kg – 4.4 lbs, 6.2 lbs or 7.3 lbs respectively). When the hammer goes back all the way, the trigger mechanism releases the cocking piece, which acts on the hammer and lowers it onto the firing pin with the power of the main spring and the hammer spring, to fire the cartridge. It should be noted that the cocking piece can be cocked ONLY by slide retraction and lowered only by trigger pull, so, if the gun must be stored for the long time, the cocking piece must be lowered by dry firing the gun, to awoid main spring weakening.

The basic P2000 employs the CDA trigger system as describet above, but with added ambidextrous decocker at the rear of the frame, below the hammer (somewhat like Mauser M2). The P2000 variations, marked V1, V2 and V4 have the CDA trigger with different trigger pull weights (see above), and the P2000 V3 has conventional, SA/DA trigger mechanism with decocker at the rear side of the frame, below the hammer. All P2000 also featured internal firing pin safety.