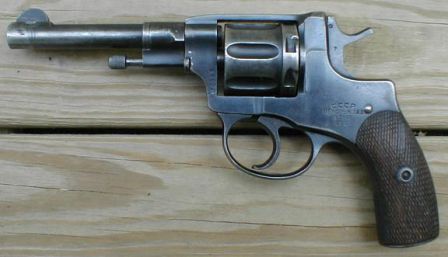 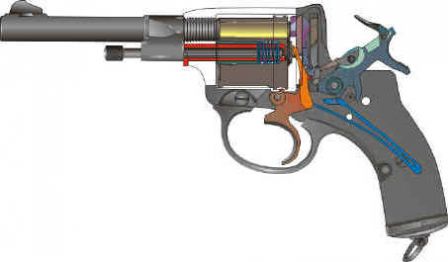 The M1895 Nagant revolver was designed in Belgium by the Nagant brothers (Emile and Leon) in the late 1880’s – early 1890’s, and was adopted by numerous countries. These included Sweden and Poland. Most of its manufacture and usage though, was undoubtably Russian (and later by the Soviet Union).

The Russian government adopted the Nagant revolver in 1895, and local production began in 1898 (the first shipments were from Belgium). It was the standard Russian sidearm until 1930, when the M1895 Nagant was declared obsolete. it was however  widely used and also produced during World War 2, and manufacture was only finally ceased circa 1950.

Later, some sporting revolvers, both in 7.62mm and in .22LR were developed on the Nagant platform. Interestingly enough, the M1895 revolvers can still be seen carried by some security personnel in Russia, especially by Railroad Security and by some armed guards. Usually, those revolvers are 2 to 4 times older than the men who carry these guns..

From a technical point of view, Nagant revolvers were almost outdated at the moment of their adoptation in 1895, since the newest revolvers like S&W with Hand Ejectors or Colts with side-opening cylinders were much faster to reload.

On the other hand, the M1895 had some unusual and interesting features, one of which was a sealed gas cylinder, which made the Nagant a rare example of a revolver suitable for mounting a silencer (suppressor). Such practice was known by the NKVD and some Red Army special forces (recon and scouts during WW2). A special suppressor, called a “Bramit device” was designed by the Mitin brothers and could be mounted on the barrel.

The M1895 Nagant is a solid frame, seven shot revolver with non-removable cylinder. The loading and unloading was completed via the loading gate at the right side of the frame, each cartridge one by one.

Spent cases were ejected by the ejector rod, which, when not in use, was concealed within the cylinder axis. It would be swung to the side on the ejector rod link when it was to be used. The original guns were double action, but the Tsarist government ordered that some M1895’s should be retrofitted with single action triggers and issued to enlisted men, while DA guns should be issued only to officers and police. In the Red (Soviet) Army only double action Nagants were issued.

The sealed gas cylinder as mentioned above, was intended to trap all of the powder gases to propel the bullet (in most revolvers some gases escape out of the gap between the cylinder face and barrel breech). To achieve this, the cylinder moves ahead a bit when the hammer is cocked, enclosing the barrel breech area with a recess in the front of each chamber. The 7.62x38mmR cartridge, unique to that design, had a long case with a tapered mouth – the bullet was totally enclosed within the case.

When the cylinder moves forward, the cartridge case mouth entered the barrel breech and was used as an additional seal. This was a complicated mechanism, mostly useful when the guns were used with a sound suppressor.

While being somewhat complicated and relatively slow to reload, with ammunition of marginal power, Nagants were otherwise good guns, reliable, acurate and quite popular among the troops.