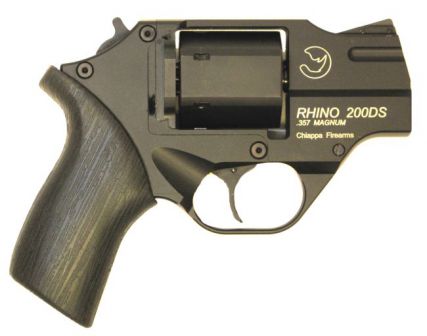 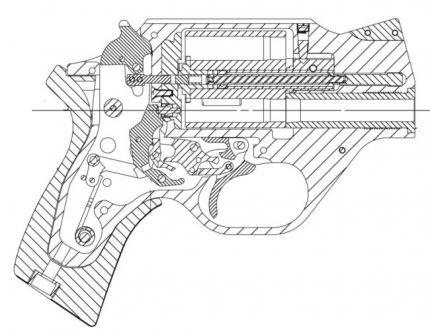 The Rhino Revolver is a new offering from Italian company Armi Chiappa. This revolver was designed by Antonio Cudazzo and Emilio Ghisoni. The latter also being the designer of the line of Mateba revolvers, including the Unica semi-automatic revolver. The Rhino revolver is initially offered as a “pocket-carry” self-defense version.

It was designed from scratch with the intention of providing the most controllable and accurate shooting. This is thanks to its specially designed trigger / hammer system and extremely low barrel axis, as the gun fires from the bottom chamber of the cylinder, rather than the traditional top. It must be noted that while this setup is quite rare, it is not unique. The Mateba Unica revolver also fires from the bottom chamber, as well as the Russian OTs-38. The overall layout of the revolver is optimized for concealed carry, with the cylinder made with a hexagonal (rather than round) cross-section, to make the gun thinner. The low barrel axis also helps manage recoil, as its force goes straight back into the shooter’s palm, rather than causing the muzzle of the gun to jump up, as happens with traditional revolvers. Where recoil force is applied above the holding point, the leverage generated causes the gun to rotate up (jump) under recoil. The other result of this layout is that the Rhino revolver has a somewhat complex trigger setup.

The Rhino revolver is a double / single action revolver with swing-out cylinder. The frame of the gun is made from “Ergal” aluminum alloy; the cylinder, barrel and other important parts are made from high quality steel. Reloading of the cylinder is achieved by swinging the cylinder to the left, then pushing the ejector rod to extract all six spent cases at once. Once the chambers are empty, fresh cartridges can be loaded into the cylinder, individually or by using the speedloader. The loaded cylinder is then snapped into place and locked. The cylinder latch lever has an unusual location, as it is installed at the top rear of the frame, co-axially with the cocking lever (“false hammer”). To unlock the cylinder for opening the operator must push the latch lever forward with their thumb.

The trigger setup is unusual as it features a fully concealed hammer, which is located inside the frame. To provide a “Single Action” firing mode with manual hammer cocking before each shot, the Rhino revolver is fitted with a cocking lever (“false hammer”), at the top rear of the frame, where the hammer is traditionally located on revolvers. This cocking piece / “false hammer” is connected to the concealed hammer via a push link. To cock the hammer in Single Action mode, the operator must pull the spur on the cocking piece / false hammer back as far as it will go, and then release it. This movement will cock the concealed hammer via an internal linkage, but the cocking piece / “false hammer” will return to the forward position once it’s released. For Double Action firing, the operator can pull the trigger as usual, and this will first cock the internal hammer and then release it at the end of the trigger pull.
In the basic “concealed carry” version. the “Rhino” revolver is fitted with fixed open sights. Longer barreled versions will be available with fixed or adjustable sights.