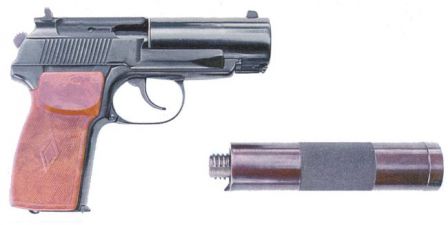 PB / 6P9 silenced pistol, with front part of the silencer removed for carry, storage or maintenance

The PB suppressed pistol (Pistolet Besshumnyj – Noiseless Pistol), also known for Soviet/Russian army as 6P9, has been developed by 1967 for Spetsnaz elements of the Soviet army, as well as for operatives of KGB. The pistol is based on significantly modified Makarov PM pistol, and features an unique integral two-part silencer. The rear part of the silencer is fixed around the barrel, which is drilled to decrease the muzzle velocity below the speed of sound. The front part of the silencer / sound suppressor is quickly detachable, so pistol can be broken down into two parts for more convenient carry. Unlike many other integrally suppressed pistols the PB suppressed pistol can be safely fired with the front part of the silencer / suppressor removed, but this will greatly increase the sound signature. Still, it is an useful emergency feature. Because the front part of the barrel is enclosed into the suppressor, the slide is made very short and cannot contain the return spring. Instead, the return spring is located in the grip of the gun,at its rear end, and linked to the slide via the rocking lever. The double-action firing unit with external hammer and slide-mounted safety/decocker, as well as the magazine, are borrowed from Makarov PM pistol with no modification. PB has fixed sights with luminous inserts for use during low light conditions. For carry, it is issued with a special holster, which has compartments for the gun and the detached front part of the silencer.