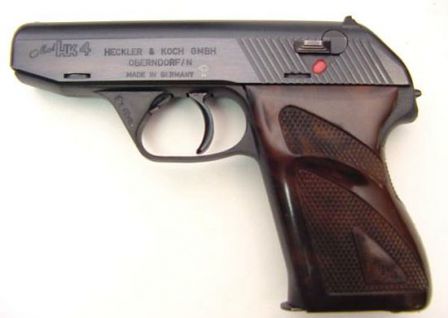 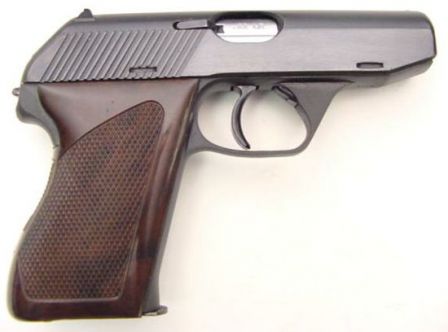 The HK-4 was the first pistol to emerge from the now famous German company Heckler & Koch. HK-4 was the brain child of the Alex Seidel, one of co-founders and master minds of Heckler-Koch, and a former Mauser employee. During his years at Mauser Seidel participated in development of several pistols, including the famous Mauser HSc. In 1952 Seidel at HK developed a prototype .22LR caliber pistol, based on Mauser HSc, but the legal problems with Mauser precluded its production. In 1964, Seidel started the development of the multi-caliber pocket-size pistol of civilian and police use. This pistol, designated as HK-4 (Heckler-Koch, four calibers), had some features, based on Mauser HSc, but in severely modified form. Mass production of the new pistol started in 1968, and continued until 1984, with about thirty eight thousands pistols being made. Of those, about 12 thousands HK-4 pistol were bought by German police and other government agencies, the rest has been sold on domestic and foreign civilian markets.

HK-4 pistol was one of the first handguns to employ idea of modularity. Each pistol can be accommodated for one of the four basic calibers, with just replacement of the barrel, return spring, and the magazine. Many HK-4 pistols were sold with caliber change kits, which included three additional barrels with springs and appropriate magazines. The frame of HK-4 pistols were made from aluminum alloy, slides were formed from sheet steel. Double action trigger and, especially, the partially exposed hammer were somewhat similar in design to Mauser HSc pistol. Manual safety has been located at the left side of the slide, and, when engaged, moved the rear part of the firing pin out of the reach of the hammer and locked the firing pin against the movement toward the cartridge in the chamber. Additional automatic safeties included magazine safety, which blocked the trigger when magazine has not been properly inserted, and a disconnector safety. Return spring was located around the stationary barrel. Barrel was easily detachable from the frame, and the barrel lock lever has been located inside the trigger guard, at its front. To accommodate either centerfire or rimfire ammunition, HK-4 featured a removable breech plate with two channels for firing pin – one for centerfire ammunition and another for rimfire ammunition. To convert between those types of ammunition, one must disassemble the pistol, remove the breech plate from the slide and set it so the side marked with "R" will face the barrel breech for rimfire ammunition, or the side marked with "Z" must face the barrel breech for centerfire ammunition. HK-4 has internal slide stop mechanism, which locks the slide open after last shot from magazine has been fired. The slide stop is automatically disengaged when a new magazine is inserted. To close the slide on the empty chamber, slide stop is disengaged by the trigger pull.