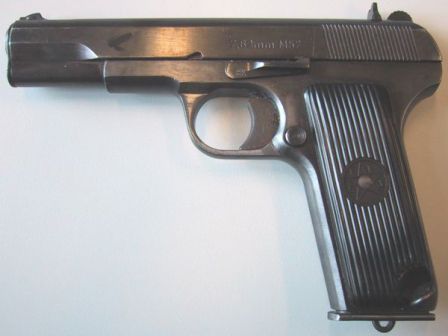 The M57 pistol, as manufactured by Yugoslavian Crvena Zastava (Red Banner) factory of former Yugoslavia (now Zastava Arms factory in Serbia), was a standard sidearm of Yugoslavian army. Adopted in 1957, it was a straightforward copy of the Soviet Tokarev TT pistol, although M57 had longer grip that hosted bigger magazine (9 rounds versus 8 rounds in TT). In around 1970 Crvena Zastava began production of the similar pistol, chambered for 9×19 Luger ammunition. This model is known as M70(d).

M57 pistol is short recoil operated, locked breech pistol that uses browning type action with swinging link. trigger is of single action type, but pistol has no manual safeties except for a half-cock notch on the hammer. Magazine is single stack. Sights are fixed.