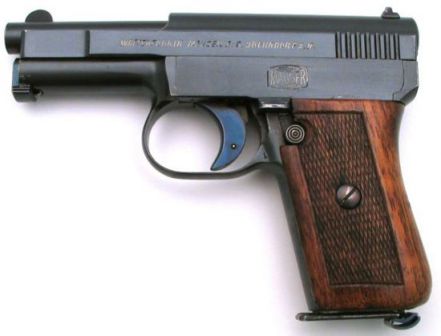 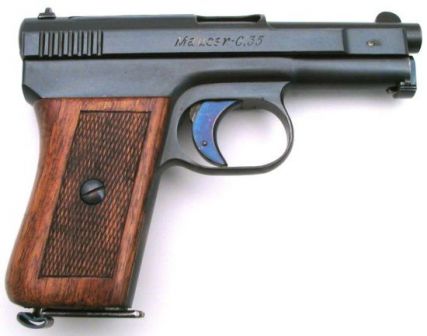 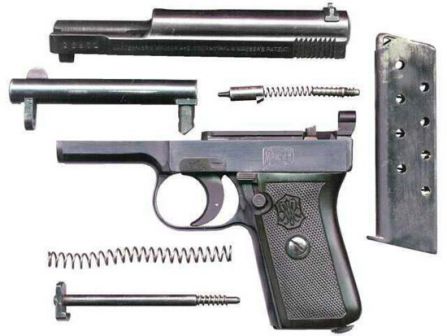 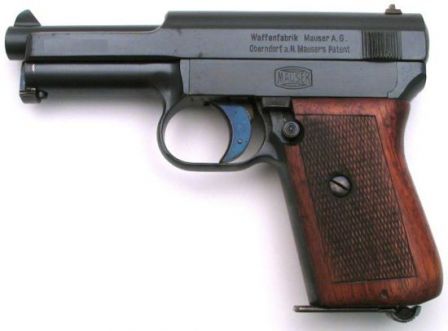 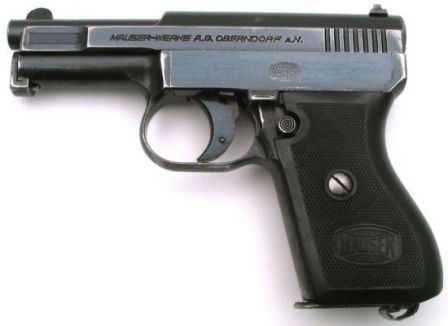 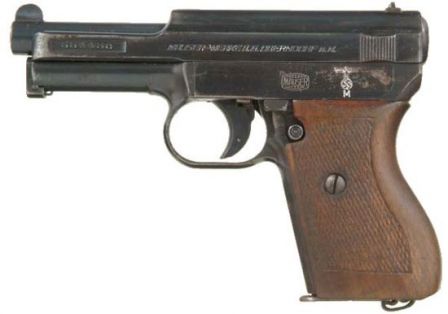 German designers from famous Mauser Werke worked on various semi-automatic pistols since about 1893. In the year of 1909 they set to develop a new, relatively simple semiautomatic pistol, chambered for 9x19mm Luger ammunition with reduced load. This weapon, known as Mauser Model 1910, was not a great success; its updated version, known as Model 1910/12, was manufactured in small numbers under contract with Brazilian navy. In the mean time, it was decided that a new design is more suitable for ammunition, less powerful than a "military" 9mm Luger, so, in the 1910, the basic design was scaled down to relatively new 6.35mm Browning ammunition (known in USA as .25ACP, first introduced in 1906 in Europe and in 1908 in USA). Known as Mauser Model 1910, this became a rather successful pocket pistol. Just before the start of World War One Mauser turned out a slightly bigger version of the same gun, chambered for another Browning-designed cartridge, the 7.65mm (also known as .32ACP). Limited numbers of these 7.65mm pistols were used by German Army during World war 1. Guns, manufactured since 1914 (both smaller 6.35mm and bigger 7.65mm) were slightly different from original design in appearance and minor details, such as design of the barrel retaining pin lock. Over the following two decades, Mauser produced several minor variations of these pistols, which differed in the markings, shape of slide serrations etc etc, but basic design remained basically unchanged. In the year of 1934, Mauser introduced a final version of this line, Model 1934. Its major change from model 1914 was the shape of the grip panels, with curved, rather than straight backstrap. Model 1934 was adopted by German armed forces as a substitute standard, and also was used by various police and security forces. Key military buyers for Mauser 1934 pistols were Kriegsmarine (Navy) and Luftwaffe (Air force).

Mauser 1910 type pistols are simple blowback operated weapons with stationary, but easily removable barrel. barrel is held to the frame by the long pin, which passes through two underbarrel lugs below the barrel (one at the front and one below the breech). For disassembly, slide of the pistol is locked back, and pin is unlocked and rotated sideways, then pulled out to the front, so the barrel can be pulled up from the frame. Slide of this pistol has a characteristic open-top appearance, with a separate ejection window on the right side. Trigger is of single action type, striker fired. pistol is fitted with manual safety, located in the cut of the left grip panel, just behind the trigger, and with automatic magazine disconnect safety. Slide hold-open device is installed in pistol, but once slide is caught open, it can be released only by insertion of a fresh magazine. Magazine release is located at the base of the pistol grip. Sights are fixed. Grip panels are usually made from wood, but also can be made of plastic on late production guns.