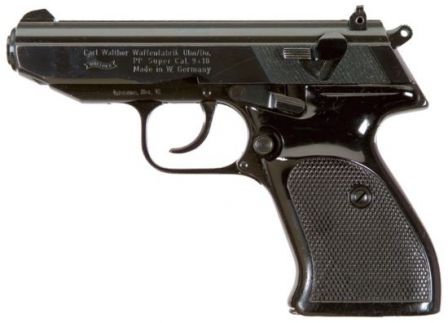 The Walther PP Super pistol came into existence circa 1972, as a proposed service handgun for West German police. At that period, German police looked for a new standard handgun and ammunition, to replace obsolete and underpowered pistols then in service. During the early 1970s there was much debate about a new service cartridge, and two major contenders were the already famous 9x19mm Luger/Parabellum, and the relatively new 9×18 Police cartridge. The 9×18 Police cartridge has been based on pre-WW2 9x18mm Ultra ammunition, developed in Germany by the Geco and Walther on request from Luftwaffe (German Air Forces). The 9×18 cartridge offered about a maximum power which could be used in relatively compact and lightweight blowback pistols. This, in turn, allowed these pistols to be simpler and less expensive than locked-breech 9x19mm pistols. Recognizing these advantages of 9×18 ammunition, the Walther company developed a police pistol, roughly based on the famous Walther PP pistol, and called it PP Super. However, by mid-1970s German law enforcement authorities selected the more powerful 9x19mm ammunition as a standard, and by the end of 1970s the 9×18 Police ammo went out of favor; Only about 2 000 of 9×18 PP Super pistols were purchased by Bavarian Police during 1970s. Some of PP Super pistols were also made in 9×17 short caliber, but the future of the police handguns was in 9mm Luger, and the Walther company dropped the PP Super from manufacture circa 1979, focusing on 9x19mm pistols like P5 and P38 / P1 / P4.

The Walther PP Super is an all-steel, blowback operated, double action pistol. Unlike its predecessor, the Walther PP, the PP Super featured an external slide stop lever, and a manual decocker on the left side of the slide, which, when pushed down, locked the firing pin and released the hammer, and then automatically returned to the 'fire' position. There was no manual safety, but the PP Super has a firing pin safety, and was intended to be carried with the loaded chamber and hammer down, ready to be fired in double action mode. The magazine catch is located on the side of the grip, next to triggerguard.