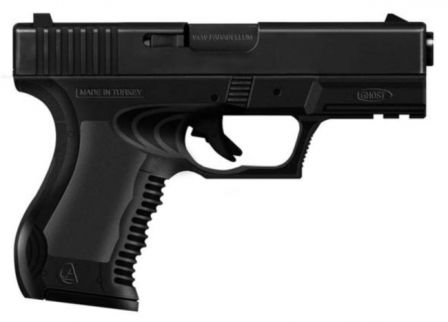 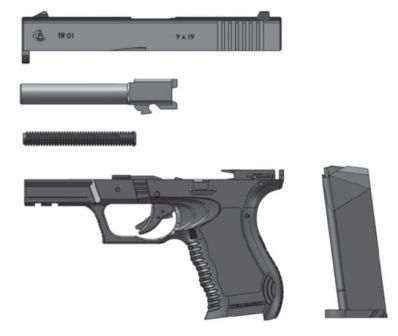 Akdal Ghost TR-01 pistol is a new product from Turkish company Ucyildiz Arms Ltd Inc. It is a compact semi-automatic pistol which is obviously intended for police, security and civilian (where permitted by law) use. It appears to be heavily influenced by Austrian Glock pistols in its design, although Akdal Ghost pistol has improved ergonomics, especially in the grip area.

Akdal Ghost TR-01 pistol is short recoil operated, locked breech pistol. It uses modified Browning-type locking, in which barrel engages the slide with single lug, entering the ejection window. Unlocking and locking (lowering and rise of the barrel) is controlled by cam-shaped projection below the chamber, which interacts with steel insert, removably set into the polymer frame. The pistol is striker-fired and utilizes pre-cocked striker, which is put to full cock by the pull on the trigger. In case of the misfire, user has no 'second strike' capability and must cycle the slide to re-cock the striker to its pre-set state. Pistol also has no manual safeties; instead, it has automatic trigger and firing pin safeties. Magazines are double stack, holding 15 rounds of ammunition, with magazine release button located at the base of the trigger guard. Sights are fixed, and dovetailed into the slide. The polymer frame features removable backstraps (of different sizes), and an integral accessory Picatinny rail below the barrel.