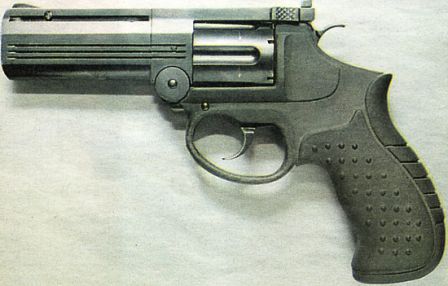 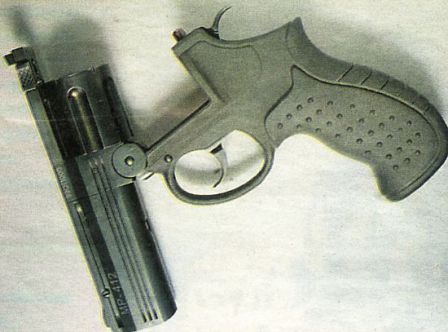 MP-412 Rex revolver, with barrel tipped down for reloading

The MP-412 revolver was designed at IZHMECH (State-owned Russian Izhevsk Mechanical Plant, a large factory known as the primary producer of Makarov PM pistols among other things). This revolver was intended for export, as handgun ownership is generally prohibited for ordinary citizens in Russia. First prototypes of the REX (Revolver for EXport) revolver were displayed at IWA-2000 arms exhibition in Nurenberg (Germany). It is not exactly known what killed this rather interesting project, but most probably it was the lack of a market, as the biggest export market, the USA, has been closed to Russian handguns since the mid-1990s, because of Clinton / Yeltsyn’s mutual agreement.

The MP-412 is a double action revolver with a break-open frame and simultaneous extraction. The bottom frame is a composite type – it consists of a steel basic frame and a polymer envelope, which forms the grip and trigger guard. Polymer grip / trigger guard unit can be removed from the steel frame if necessary. The trigger is a conventional type, double / single action, with exposed hammer. The firing pin is mounted in the frame. The barrel / cylinder group latch is located at the top rear of the frame, and is operated by two buttons that must be pushed inwards to unlock the frame. The cylinder holds 6 rounds and has an automatic ejector that throws the cases out of the cylinder once the barrel is fully tipped down. If necessary, the automatic ejection feature can be manually switched off.