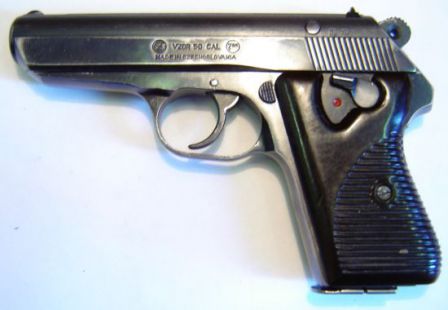 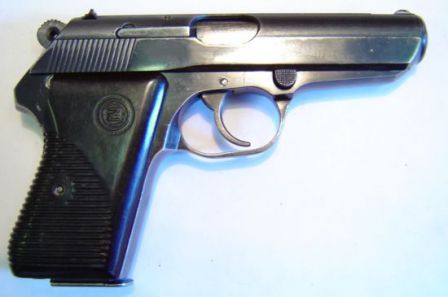 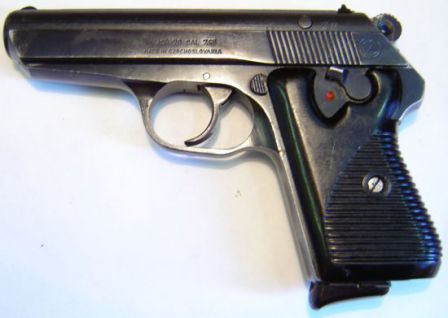 The small, pocket-sized Vz.50 was developed during late 1940s for police use and it was chambered for the marginally powerful 7.65×17 Browning ammunition. Apparently influenced by the Walther PP in design, the Vz.50 had several differences in safety and disassembly. In the early 1970s the basic design went through minor face-lift, and the “new” design received the designation of Vz.70. Many Vz.50 pistols were refurbished to Vz.70 standard, with different finish, grip panels and a slightly different safety lever. New Vz.70 pistols were also manufactured between 1970 and 1983. After the replacement in service of the older Vz.50 and Vz.70 by more modern 9mm Vz.82 pistol, most were sold as surplus, as Cz-50 and Cz-70, respectively.

The Vz.50 (commercially sold as Cz-50) is a compact pistol of all-steel construction, firing the relatively weak 7.65mm ammunition. It has a simple blowback action with a fixed barrel. The trigger is double-action, with an exposed hammer and a frame-mounted decocking safety lever. The sights are fixed. Magazines are single stack. The magazine release button is located relatively high on the left side of the frame, behind the trigger. Vz.70 (Cz-70) pistols are similar, with minor differences in the finish, shape of the safety lever and grips. Manual safety is a lever at left side of the frame, behind the trigger guard. To set on safe: pull the lever down; if the hammer was cocked, it will be automatically brought down to rest. To disengage safety: push the lever up; a red dot will appear on the frame.

How to field-strip (disassemble) Cz-50 and Cz-70 pistol: 1) remove the magazine by pressing the magazine release button; 2) check that the chamber is empty; 3) push the disassembly button, located at the right side of the frame, above the front of the trigger-guard; 4) while holding the disassembly button, retract the slide all the way back, raise the rear part of the slide off the rails, then slowly release it forward and off the barrel; 5) remove the return spring from the barrel
Reassemble in reverse order