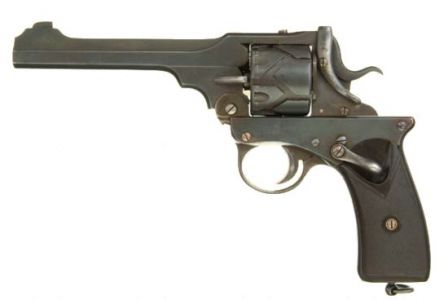 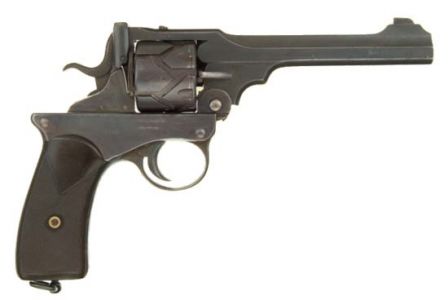 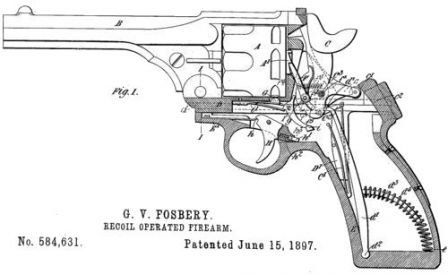 Diagram from the original US patent granted to Col. Fosbery for the design of his automatic revolver; Upper frame is in forwardmost position. 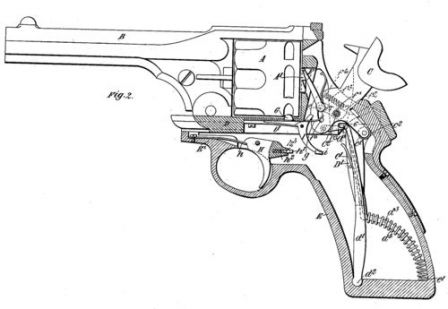 Diagram from the same patent, showing upper frame in recoiling position. Note that the gun in the blueprint uses a different cylinder rotation mechanism when compared to production model Webley-Fosbery guns.

This unusual weapon, which combined features (both good and bad) of both a revolver and a self-loading pistol was the brainchild of British Colonel G. V. Fosbery. The basic design was conceived during the last years of the 19th century, and the first production guns appeared from noted British gun-making company Webley & Scott in 1901. The Webley-Fosbery revolvers were widely tested by various armed forces, but never adopted because of an  over-complicated design and insufficient advantages over either a double-action revolver (like contemporary Webley & Scott revolvers) or early self-loading pistols. Webley-Fosbery revolvers were produced in several modifications up until the start of WW1. It saw limited action in the Boer wars, and was used during the Great War by a few British officers who purchased it privately.
The Webley-Fosbery revolver, in fact, had few advantages over contemporary revolvers of the same caliber. In the main, the advantages were reduced recoil (because of its recoiling action and heavier weight) and somewhat improved accuracy in rapid fire (because of the self-cocking action and reduced recoil). Its mechanism was quite sensitive to dirt and fouling, and the gun must be held tight while firing, otherwise the recoil movement of the upper frame will be insufficient for cycling the action. Its reloading was not much faster than that of contemporary revolvers, despite the fact that special flat clips were developed for this weapon, holding either 6 .445 or 8 .38 caliber rounds at once.

The Webley-Fosbery revolver used the recoil energy generated by each discharge, to rotate the cylinder and cock the hammer for the next shot. To be able to do so, it had a two-part frame. The bottom part consisted of a grip with a trigger unit, and has rails on its upper surface. The upper frame, which held the cylinder and tip-down barrel, as well as hammer unit, as able to recoil on the lower frame rails against a spring. Upon recoil, a special stud, fixed on the lower frame, followed the zig-zag tracks in the cylinder to rotate it and index the next loaded chamber with the barrel. At the same moment, the hammer would be cocked. Once all ammunition in the cylinder was expended, the revolver was reloaded by pushing on the barrel lock release and swinging the barrel down on its hinge, thus tipping the rear of the cylinder up. This movement activated the automatic extractor which pulled the empty cases out of the cylinder chambers all at once. Once the cylinder was emptied, fresh cartridges were loaded (either one by one or all at once, by using a flat steel clip), then the barrel was swung up and locked. After reloading, the revolver could be fired either by a double action pull on the trigger, or by manually cocking the hammer with subsequently lower single-action trigger pull. Webley-Fosbery revolvers were also fitted with manual safety levers, located on the left side of the grip frame.