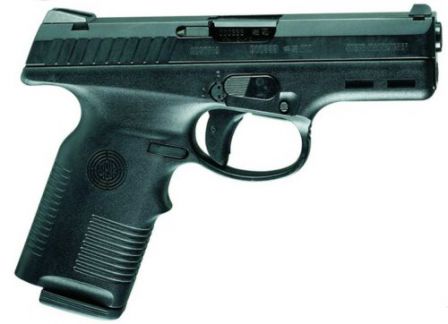 Steyr M, the original version, which is no longer in production. 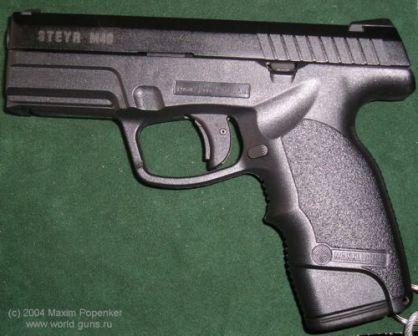 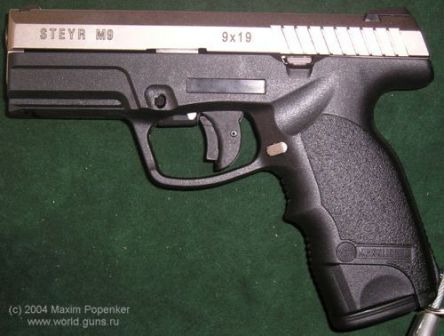 Steyr M-1A in 9mm caliber, version with manual safety. Safety is in "ON" position (push-button with white dot immediately ahead of the trigger). 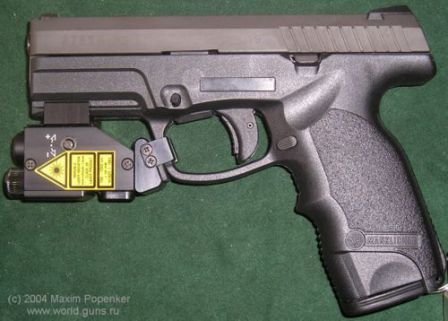 Steyr M-1A in 9mm caliber, version with manual safety. Safety is in "OFF" position (ready to fire; push-button is depressed up and into the frame). The pistol is also fitted with laser pointer.

The Steyr M series pistols were first announced in 1999. Steyr M pistols, along with compact version, Steyr S, which were made in Austria by the Steyr-Mannlicher GmbH & Co, are not made any more. Since the January 1st, 2004, the Steyr M and Steyr S pistols have been replaced in production by the slightly redesigned Steyr M-1A pistols. Steyr M1-A pistols feature redesigned grip and frame shape, and Picatinny rail (instead of the proprietary rail) under the barrel. Another change from original M series pistols is that M-1A pistols are now available in two variants, with or without manual safety. There are probably some more minor differences.

The Steyr M and M-1A pistols have probably the most ergonomic grip since the Luger's "Parabellum" pistol. The ideal 111 degrees grip angle, combined with low barrel axis, results in minimum muzzle jump and felt recoil, as well as in good "pointability". The unusual "trapezoid" sights, while uncommon in shape, provide good accuracy and acquisition speed, once shooter gets used to it. Reliability is also very good.

The Steyr M-1A pistols are short recoil operated, locked breech firearms. The barrel is operated by Browning cam system. Barrel locks into slide via large ejection window. The frame is made from high impact-resistant polymer, with integral Picatinny rail under the barrel. The slide stop lever and magazine release button are located on the left side of the frame. The Double Action trigger controls the internal striker. The unusual safety system consists of several separate safeties, including the automatic trigger and firing pin safeties, as well as unusual manual safety and internal lock. When the lock is engaged, it completely blocks the operation of pistol. The safety is controlled with dual buttons, which are located just above the trigger guard on both sides of the frame. When buttons are depressed simultaneously, the safety button springs down from the frame, and the trigger is blocked. To turn the safety off for fire, a shooter must push the safety button up with its index finger. There also is a version of the M-1A pistol which doesn't have a manual safety. The standard sights feature a trapezoid rear sight and a triangle front. Both sights are dovetailed into the slide and can be replaced with variety of the factory or aftermarket sights in various configurations.