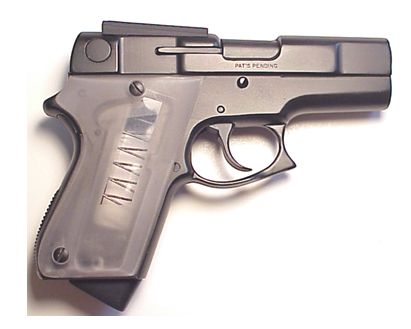 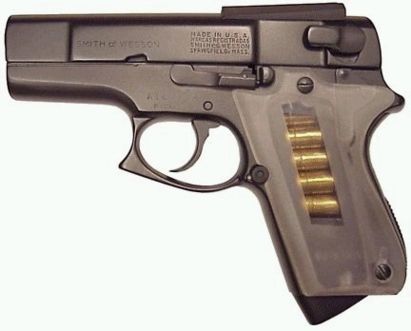 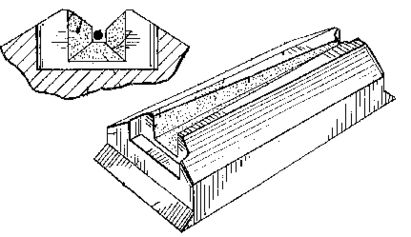 Diagram of Guttersnipe sight for ASP pistol, from original patent

The ASP pistol has been developed by American gunsmith Paris Theodore in early 1970s. It is believed that the design was inspired by some US government organisation(s) which required a compact and powerful handgun for its undercover agents, operating worldwide. Some years later (circa 1982-83), small batch of ASP pistols (about 250 to 300 pieces) has been released to the American market; these guns were manufactured by Armament Systems and Procedures company. After that, this gun was never manufactured.

The ASP pistol was designed as a deep concealment weapon, and thus had a compact size and no-snag appearance, with distinctive shape. The most interesting thing about the ASP is its patented Guttersnipe sight, which required no front sight blade. The relatively large rear sight block had an open-top tunnel, through which the shooter aimed the gun. This was not the best long-range arrangement, but the ASP was intended for close-range clandestine work only, so this sight was good enough – fast and snag-proof.

The ASP pistol was not an entirely original design. Instead, it was a major rebuild of the well-known Smith&Wesson Model 39 double action semiautomatic pistol. The rebuild procedure included cutting off the parts of the slide, the barrel and the grip frame, removal of the hammer spur, reshaping of the trigger guard and grip frame, and many other changes. The grip panels were made from translucent Lexan plastic, allowing the shooter to quickly observe the rounds, remaining in the magazine. All sharp corners were smoothed out, and all external surfaces were covered with black Teflon finish. The ASP retained the double action trigger with slide mounted safety-decocker of the S&W M39, as well as its short recoil operated, locked breech action. Standard S&W M39 magazine has been shortened to fit into the shorter grip of ASP, and held seven rounds of 9mm ammunition instead of original eight.