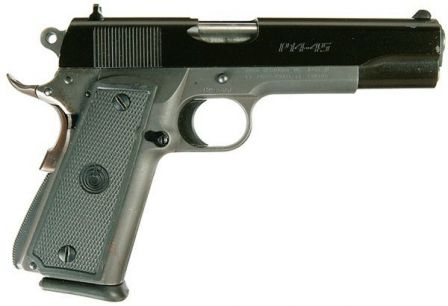 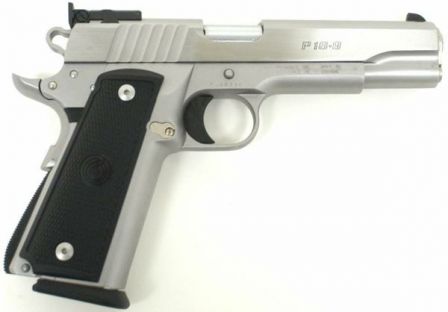 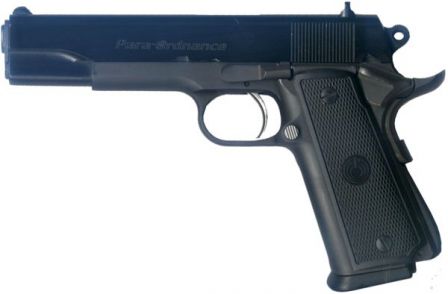 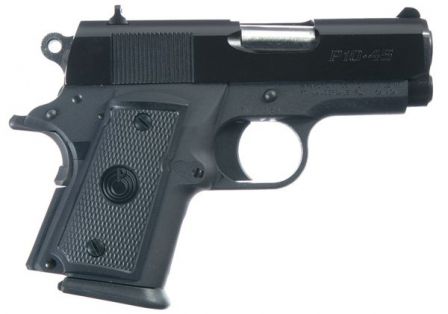 In the late 1980s, a small Canadian company called Para Ordnance introduced a “high capacity conversion kit” for US M1911A1 type pistols. This kit consisted of an updated frame with thicker grip, which accommodated a double-stack magazine (also supplied with the kit), effectively doubling the available round count for 1911 shooters. The kit also included a new trigger assembly with suitable dimensional changes to fit into the widened grip frame. With the initial success of these kits, Para Ordnance soon introduced a line of complete M1911A1-type pistols with high capacity magazines, available in 9mm, .40 S&W and .45 ACP calibers. Compact and semi-compact models followed, and Para Ordnance pistols found buyers among both civilian and police shooters. In 1999, Para Ordnance introduced the new line of LDA (Lightweight Double Action) pistols, which combined the established 1911-type general design with the double-action-only type of trigger, for improved safety. At the present time, Para Ordnance offers its pistols with either standard single action or patented LDA triggers, with single or double-stack magazines, and in a variety of sizes and finishes. It is believed that Para Ordnance LDA pistols have already found some customers among the police agencies of the USA and Canada.

Early Para-Ordnance pistols were almost exact copies of the Colt M1911A1 pistol, except for the wide-body frames; in fact, these early Para-Ordnance frames accepted standard M1911A1 slides and barrels without any major modifications. However, with time, Para Ordnance design team, led by Ted Szabo, introduced several new features, other than different sizes of frame and barrel. First came the LDA modification, which was designed to allow the gun to be safely carried with a round in the chamber and the hammer down, and to avoid a heavy double-action trigger pull when bringing the gun into action in fast-pacing defensive scenarios. First appearing in 1999, the Para-Ordnance line of LDA pistols now includes all sorts of guns – full-sized and compact, with single and double-stack magazines. Another step forward from the basic M1911 design was the patented “Power Extractor”, or PXT in short. Since 2004, all Para Ordnance pistols are manufactured with PXT-type extractors, which are said to improve extraction reliability.

All Para Ordnance pistols are short-recoil operated, locked-breech weapons. The classic Browning locking system consists of two lugs at the top of the barrel, which engage the cuts on inside of the slide. The unlocking action on recoil is caused by the swinging link, which connects the barrel breech with the frame. Most Para Ordnance pistols are made with steel frames; however, there were certain versions with aluminium alloy frames. Standard Para Ordnance pistols have a single action trigger with an exposed hammer and a manual safety on the frame. There is also a typical M1911-style automatic grip safety and a disconnector, which does not permit the gun to be fired unless the slide is fully closed and barrel is locked.
However, the LDA models have an entirely different trigger setup. The key for the “Lightweight Double Action” (hence the LDA acronym) is the hammer cam, which is interposed between the main spring and the hammer. During the cocking cycle the hammer is pulled back; this movement causes the cam to rotate and to compress the main spring. Once spring is compressed, the hammer cam is held cocked by the main sear. The hammer, which is not directly connected to the main spring, is then returned forward by its own, relatively soft hammer spring. When the trigger is pulled, it raises the hammer until it connects to the cocked hammer cam; at this moment, the sear is depressed and hammer cam, powered by the main spring, forces the hammer forward and toward the firing pin; at the same moment, the automatic firing pin safety is released to allow the firing pin to hit the primer. This system, which is obviously based on the FN’s “Fast Action” trigger of the early 1980s, allows for a very light and smooth trigger pull, since the hammer spring is very light, and the stronger main spring is cocked only during the reload. However, LDA could not be considered as a “true Double Action Only” design, as it does not permit a fast second strike in the case of misfire; in this case, the shooter must manually recock the main-spring and hammer cam by pulling the hammer back manually (however, the Para Ordnance manual does not recommend that; instead, it is advised to cycle the slide and eject the failed round; this will also recock the main spring automatically). Another issue is that while the gun looks uncocked at all times except when trigger is being pressed, the main spring may still be cocked and under tension. There’s no way to safely release the main spring and hammer cam, except by a trigger pull; so, after unloading and before storage, the shooter must point the pistol in a safe direction and dry-fire it once (pull the trigger completely and then release it). Otherwise, the hammer cam will remain cocked and main spring will be under tension, and this could impair pistol reliability in the long term. Another unusual feature of the LDA is that the automated grip safety locks the slide when not disengaged properly by the shooting hand.
Para Ordnance pistols are available in a variety of magazine capacities; the maximum magazine capacity and calibre is usually indicated by the model designation, i.e. P14-45 is a .45 calibre pistol with 14-round capacity, and P16-40 is a .40 S&W calibre pistol with 16-round capacity. Para Ordnance pistols can be fitted with either fixed or adjustable sights, with the rear sight dovetailed into the slide.

Manual safety: A lever, located at the side of the frame above the grip panel (ambidextrous levers on the “Limited” series pistols). Push the lever up to set on “safe”, pull the lever down to set on “fire”. Note: on the single action pistols, the safety will engage only when the hammer is cocked; on the LDA series of pistols, the hammer is always uncocked and the safety is applied with hammer down. It is not advised by the factory manual to directly cock the hammer on the LDA pistols
How to disassemble (field-strip) Para-Ordnance pistol: (relevant only for full-size single action and LDA pistols of all calibres; for compact and semi-compact models, please refer to the Owner’s manual): 1) remove the magazine by pressing the magazine release button; 2) check that the chamber is empty; 3) with the slide in the forward position, pull the trigger once to drop the hammer; 4) put the pistol on the table with the muzzle up, with the grip safety resting on the table; 5) press inward the recoil spring plug (located just below the muzzle), and rotate the barrel bushing clockwise for about a quarter of a turn (use special bushing wrench if available); 6) gently allow the recoil spring plug to extend out of the slide; 7) push the slide back until the disassembly notch on the slide is aligned with the slide stop lug. Note that the grip safety must be depressed to do so on LDA pistols; 8) push the rounded end of the slide stop pin inward, then completely remove the slide stop pulling to the left and out of the frame; 9) push the slide forward and out of the frame; 10) lift the return spring guide out of the slide; 11) remove the barrel out of the slide.
Reassemble in reverse order.