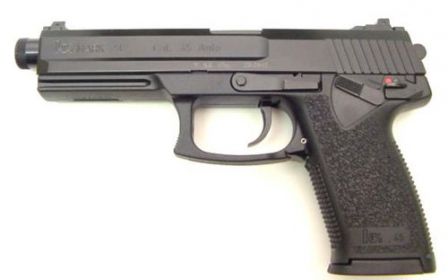 Mk.23 mod.0 pistol, left side. Above the grip are clearly seen are separate safety (rear) and decocker (middle) levers, as well as slide stop lever (forward). 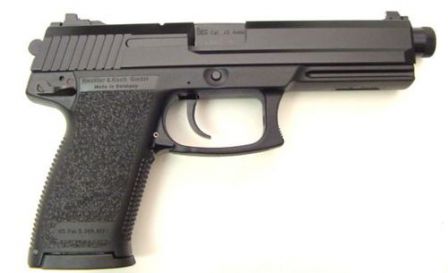 Mk.23 mod.0 pistol, right side. Note the extended barrel with screw-on thread protector on the muzzle.

This handgun was developed under request from US SOCOM (Special Operations Command) and entered the competition with Colt for OHWS – Offensive Handgun Weapon System – first offensive handgun for US Military since the adoption of the Colt M1911 Govt. The request was issued in mid-1991, and the only other major competitor to H&K was the Colt company with its SOCOM pistol. By the 1993 H&K delivered first prototypes of its contestant, and eventually HK SOCOM pistol became the Mk.23 model 0 pistol, issued by US Special Operations command to its operators. The Mk.23 mod.0 is chambered for venerable .45ACP cartridge, which provides greater stopping power than a NATO-standard 9mm Luger cartridges. Mk.23 mod.0 is designed to safely and reliable fire most powerful .45ACP +P ammunition, either with ball (FMJ) or expansive (JHP) bullets. Mk.23 mod.0 is usually issued with quick-detachable silencers, made in USA by Knight's Armaments Co, and with laser pointing module, which installs on the underbarrel rails. First production Mk.23 model 0 pistols were delivered to users in 1996.

In general, the Mk.23 mod.0 is an extremely reliable and quite powerful combat pistol, the only drawback being a somewhat excessive size and weight, so, in some cases, operators prefer to carry smaller and lighter HK USP Tactical pistols, which share most features of Mk.23 mod.0.

Heckler-Koch also produced a civilian version of the Mk.23 mod.0 pistol, designated as Mark 23, which is sold with 10-rounds magazines, to comply with US laws.

The Mk.23 mod.0 is a short recoil operated, locked breech semiautomatic pistol. The barrel locks to the slide using one single lug, which fits to the ejection port in the slide. The patented dual recoil springs arrangement allows for decreased felt recoil and increased service life of pistol. Frame of the gun is made from high-strength polymer. The double action trigger system features a separate decocker lever, an ambidextrous safety, which allows for "cocked and locked" carry, and a slide stop. Enlarged triggerguard allows for comfortable shooting when wearing gloves. Ambidextrous magazine release lever is located in the base of the triggerguard, and should be depressed down to release magazine. Both front and rear sights are equipped with luminous dots, and mounted in dovetail grooves.