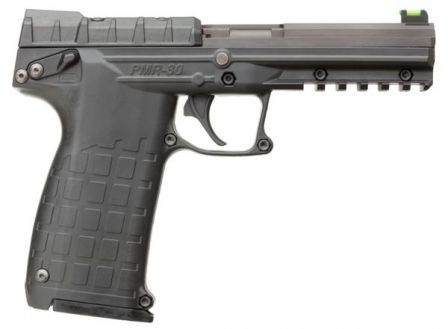 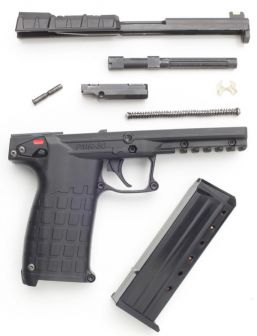 The Kel-Tec PMR-30 pistol is a most recent development of the US-based Kel-Tec CNC Industries Co, an innovative arms-making company led by renowned small arms designer George Kellgren. The Kel-Tec PMR-30 pistol entered production in 2010, and is intended for civilian market, as an inexpensive, yet effective personal weapon for practice, small game hunting and self-defense. Thanks to the light weight and low recoil, it is suitable for most shooters, even those who can't stand recoil of the more powerful handgun ammunition. Yet, this pistol is not a toy by any means – it delivers about 190 Joules (139 Ft.Lbs) of muzzle energy per every shot, and there's plenty of shots per every magazine.

The Kel-Tec PMR-30 pistol uses interesting operating system, which manufacturer calls "hybrid blowback/locked-breech system". In my opinion, however, this system can be better described as delayed blowback, as there's actually no rigid mechanical locking between the barrel and slide upon discharge. The slide is free to recoil, and the barrel also is allowed to recoil a little against the steel insert, set into the frame. If the chamber pressure is high (gun is loaded with 'hot' versions of the .22 WMR ammo), the friction between the case and chamber walls will cause the barrel to recoil along with the case, adding its mass to the mass of the slide and thus slowing (delaying) down the initial recoil while pressure is still high. If chamber pressure is low enough, the case will start to slip out of the barrel immediately, just like in any other simple blowback weapon. To quote Kel-Tec design engineer, "It's a balancing act between the bullet friction pulling the barrel forward, and the case friction in the chamber pulling the barrel back. Bullet friction does not change much based on round pressure, but the case friction will.". The Kel-Tec PMR-30 pistol is built around a compact aluminum alloy frame, which is set into polymer (Zytel) grip frame. The slide and barrel are manufactured from steel, and the rear part of the slide is also enclosed into the polymer housing which has large cocking serrations and also carries an integral rear sight base on the top. The trigger is of single action type, with ambidextrous safety levers, conveniently located at either side of the grip frame. Double-stack, single feed magazine is also made from Zytel and has capacity of 30 rounds. Magazine release is located at the base of the grip, to provide maximum protection against accidental magazine release. The Kel-Tec PMR-30 pistol is equipped with fixed iron sights with color fiber-optic inserts; front sight is dovetailed to the slide.