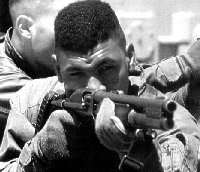 The shotgun is probably the oldest type of all shoulder fired firearms.

Many of the earliest guns were smoothbore and loaded with ‘shot’. Shotguns were and still are used for hunting, since multiple projectiles increase the chance to hit the target, but shotguns have also been used in combat in almost all wars since their introduction. Devastating short-range firepower and flexibility in loads are the key advantages of shotguns as fighting weapons.

During the 20th century shotguns saw a lot of combat, as a military trench clearer, and later – jungle and urban close quarters battle weapon. Police used shotguns for riot and crowd control, and as a general purpose short and medium range weapon for about 150 years.

The first well known military use of shotguns is dated back to the Great War (1st World War), when American troops used various pump-action and self-loading shotguns in trench warfare ( and received an official German complaint about the practice).

During the 2nd World War shotguns were used as security weapons (for guarding and anti-riot purposes), for close combat in jungle environments of SE Asia, where the self-loading shotguns (like the Remington 11 and Auto-5 – both of Browning design) proved to be very valuable for their devastating short-range firepower. Shotguns were also used for aerial gunnery training. The Vietnam war also saw many shotguns used by US troops in the jungle, but these were mostly pump-action shotguns.

At the present time shotguns form a valuable part of the equipment list of both police and military forces around the world, and its development continues. There have been several programs intended to increase the shotguns effectiveness and combat range, but these proved mostly to be less than successful.

Most combat shotguns were and still are the adaptations of commercial, hunting firearms for the new role, but during the last three decades of the 20th century some specialized combat shotguns were developed. Some of these remained only in prototype or pre-production status while others flourished and found their way into the police and military stocks. 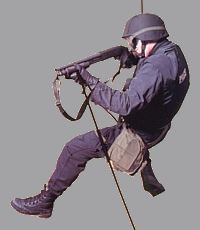 Combat shotguns are usually designed with two basic action styles – repeating “pump-action” or semi-auto. Double-barreled shotguns were also used in the early period, but these are too slow to reload for combat purposes. However, sawed-off versions of the double shotgun, with most of the barrel and the butt removed, have certainly seen some use on both sides of the law as a very-short range, hide-away weapon of devastating power.

General features of the Shotgun:

The main advantages of shotguns are their versatility and short-range firepower.

Shotguns can fire multiple projectiles of various sizes, creating a lethal pattern, which will increase chances of hitting the target, or single large projectile, powerful enough to drop down a large brown bear, or incapacitate a human being protected in all but the heaviest body armour. Shotguns also can fire special purpose ammunition, such as door buster slugs, and even high explosive and incendiary rounds, as well as less-than-lethal ammunition. This is useful for riot control and other police operations.

The disadvantages of combat shotguns are the limited effective range of fire (about 50-70 meters with standard buckshot, up to 100-150 meters with specially designed subcaliber or fleschette loadings). Shotguns also are sometimes relatively large (especially when compared to modern submachine guns), and can have a heavy recoil with the most powerful loadings. The size and weight of the shotgun ammunition effectively limits both the magazine capacity and the amount of ammunition a soldier can carry during the mission.

Pump action means, that for each shot the shooter cycles the handguard back and forward (in some guns, such as Russian RMB-93 or South African Neostead – forward then back). This movement removes the used shell, cocks the action and chambers the new shell.

This design is a little slower than semi-auto, but offers greater flexibility in shell selection. This allows for mixing of the different types of loads and usage of low-power or unreliable loads. This feature is especially useful for police and home defense usage, since the pump-action shotguns can fire low-powered less-than-lethal ammunition (with tear gas or rubber buckshot).

Semi-autos usually have less recoil (especially gas-operated ones), and a higher rate of fire, but can be somewhat more sensitive to load selection. The greater firepower offered by semi-automatic shotguns, is especially useful for military applications. Short-range encounters are usually very rapid, and the amount of firepower used in a short period of time is essential to win the scenario and survive.

To take advantage of both pump and semi-auto designs, some manufacturers designed select-action shotguns. The user may select the action style with just a turn of the lever or so. Such shotguns are Franchi SPAS15, or Benelli M3S90, for example. The disadvantages of those selective systems are somewhat increased weight and a greater unit price.

The combat shotgun fills a niche for versatility of use and firepower at close quarters. While the ability to dispose of shotgun rounds at a greater and greater rate continues with the further development of automatic shotguns, they certainly aren’t going away any time soon.