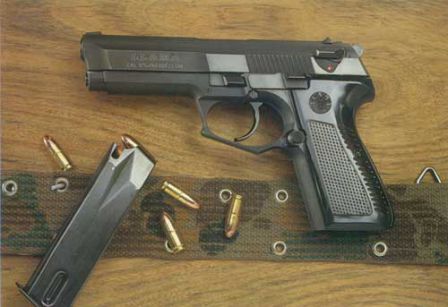 This pistol was developed by Spanish company Llama Gabilondo y Cia SA in 1986 and was adopted by Spanish military in 1988.

Llama M82 is a recoil operated, locked breech semiautomatic pistol. It uses short recoiling barrel with tilting block barrel-to-slide locking, much like the Walther P38 or Beretta 92. The Llama M82 is hammer fired, double action pistol. Safety is mounted on the slide and when activated, it moves the firing pin out of the reach of the hammer and locks it, and then decocks hammer and also disconnects the trigger bar. safety does not affect slide, so slide can be cycled and cartridge chamvered with the safety "on", but hammer will not stay in the cocked position. After that, when safety will be disengaged ("off"), gun will be ready to fire first shot in Double Action. All consequent shots will be fired in Single Action Mode. If one desires, he also can manually cock the hammer for the first shot, to improve accuracy. Frame and slide of the M82 is made from steel, so gun is relatively heavy, but strong. Triggerguard is shaped for better two-hands hold, and sights are fixed. Double stack magazine hold 15 rounds plus one in the chamber.