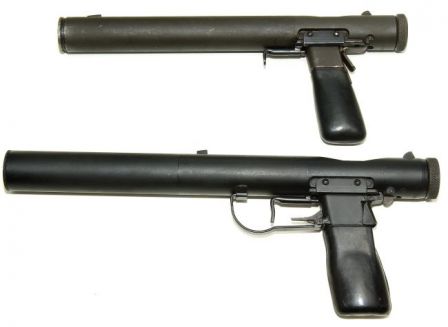 Welrod pistol was developed in UK by Special Operations Executive (S.O.E.), a government organisation which was tasked with intellegence, diversions and other special operations as well as support of the various anti-Hitler resistance movements in occupied Europe. Most of such operations were clandestine by nature and required special equipment, including special weapons. The ordinary silencers for semi-automatic pistols were well known and well developed by the WW2, but there still was the sound of the reciprocating slide during the discharge of the pistol, which was quite audible at night or in other 'quiet' environments. To solve this problem, British engineers decided to use manually operated action for the proposed gun. Early prototypes of the new silenced weapon were developed during second half of the 1942, with first prototypes tested in early 1943, in 9×19 Luger and 7.65×17 Browning calibers. Mass production of the 7.65mm Welrod pistol, officially known as Welrod pistol, Mark II, commenced in late 1943, and Birmingham Smal Arms Co, Ltd (BSA). Total number produced is unknown, but some sources stated that at about 14 000 of Welrod Mk.II pistols were produced. Production of the larger, more powerful and more effective 9mm Welrod Mk.I commenced in 1944, on request of the British Special operations forces. The latter model survived for a quite long time, and some 9mm Welrod Mk.I pistols were apparently still in operational use by British Special Operations forces as late as in 1991, during the operation Desert Storm.
During WW2, some Welrod pistols were also air-dropped to european resistance groups, most notable to Denmark. During the same period, Welrod pistols in .32 / 7.65mm were also purchased and later manufactured in USA, apparently to complement more fast-firing but certainly more noisy and less effective Hi-Standard HDM silenced pistols.

The Welrod pistol is manually operated firearm that uses rotary bolt locking with dual locking lugs. Bolt rotation and pull / push actions are controlled by user's hand through the large round knob located at the rear of the tubular receiver. Trigger is of single action type, striker-fired. A simple automated grip safety is provided at the rear of the magazine housing / grip base. On 9mm Mark I pistols, a conventional trigger guard and a manual safety were added for improved user safety. The detachable single stack magazine also served as a pistol grip, and its bottom part was enclosed into the rubber cover to provide more or less comfortable hold of the gun. The integral silencer was located in the front part of the tube, which also served as a receiver. Barrel was ported at the front, with its ported part wrapped by layers of fine mesh. Ahead of the muzzle, there were several baffles and three rubber washers, all separated by spacers. Before use, whashers had no holes to provide bullet passage, and were penetrated during the first shot. The idea of the rubber washers was to capture as much powder gases ias possible within the silencer body, and service life of these washers was no more than 10-15 rounds, after which silencer effectiveness detoriated quickly. Worn washers were replaced during disassembly of the silencer. The 9mm Mark I Welrod pistol was different in the fact that it has its frontal silencer part made as a separate unit, which was screwed onto the receiver before use. This made the gun better suited for carry and concealment during transportation through enemy territory – an useful feature for a gun that was 36 cm / 14.2 " long when ready to use.