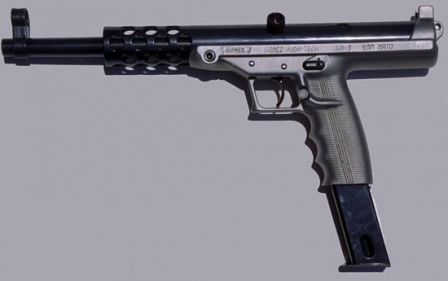 Goncz GA-9 pistol, with 30-round magazine, left side view

The Goncz GA-9 High Tech pistol was developed by the Goncz Armament Inc (North Hollywood, California, USA), and manufactured in very limited numbers between circa 1984 and 1990. The Goncz GA-9 pistol belonged to the almost useless class of "assault pistols" which, while having the size and weight of a submachine gun, offered the same firepower as a much more compact and comfortable "standard" pistols, used by various military and police forces, as well as by civilians (where allowed by law). The Goncz GA-9 pistol, for example, had the size of Mini-UZI submachine gun, but lacked the folding shoulder stock and full automatic firepower. The simple blowback operation, also borrowed from submachine gun world, resulted in increased felt recoil, and compromised rapid-fire accuracy. In general, GA-9, like many other "assault pistols" (such as Intratec DC-9 or Wilkinson Linda), was some sort of a "poor man's submachine gun", and, like others, did not succeed in this field. Unlike some other "assault pistols" the Goncz was apparently well made, but this, maybe, was one of its failing points, as the assault pistols were most attractive for marginal public, which was not ready to spend a lot on weapons.

The Goncz GA-9 is a semi-automatic, blowback operated weapon. The tubular receiver, reminiscent of a submachine gun, was machined from steel and was integral with barrel jacket. Cylindrical bolt was located within the receiver, with charging handle attached to the left side of the bolt. The grip frame, integral with the trigger guard, was also made from steel. The Goncz GA-9 pistol featured no bolt hold-open device. Manual safety was located at the left side of the grip. Standard magazine capacity was 19 rounds; extended magazines held 30 rounds. The Goncz weapons were also available in carbine form, with longer barrel (about 16" / 40cm long) and with permanently attached wooden buttstock.