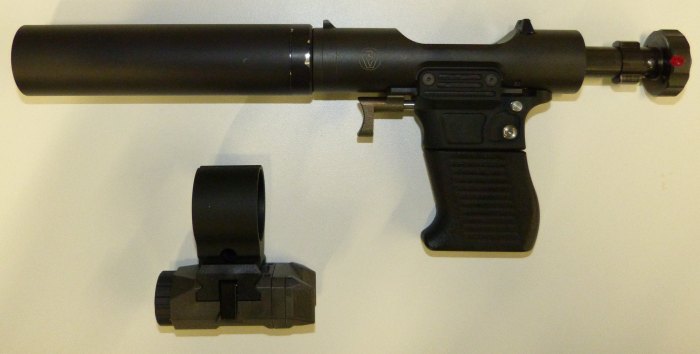 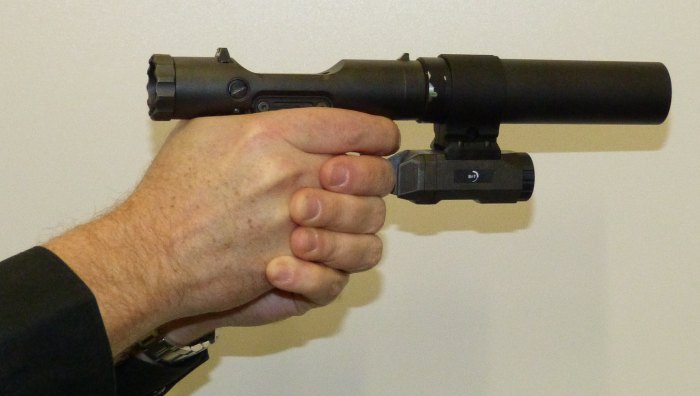 The VP-9 “veterinary pistol” is a suppressed (silenced) weapon, developed by Swiss company B+T AG (formerly known as Brugger & Thomet). According to factory literature, it is intended “for law enforcement, veterinary services and hunters who might need a very quiet single shot pistol for use when putting down injured animals and wounded game”. Obviously, it can be used for other legitimate purposes, such as taking down guard dogs or terrorists. The VP-9 pistol is built on the same concept as the WW2-era Welrod suppressed pistol, but using most modern materials and production techniques.

The VP-9 pistol is a manually operated, magazine fed, bolt action weapon. It uses rotary bolt with two radial lugs like the Mauser rifle, operated by large knurled knob at the rear of the gun. To reload the pistol, one has to grasp the knob, turn it to the left to unlock the bolt, then pull all the way back to eject spent cartridge.  To load the gun, one just pushes the bolt forward and then turns the knob to the right until it stops. This action also cocks internal striker. Trigger is of single action type, and cross-bolt manual safety is provided at the top rear of the grip. Five-round box magazine is integral with lower part of the grip, which is made from plastic. Basic, non-adjustable iron sights with contrast inserts are provided on the tubular receiver, and optional accessory mount, which can be clamped onto the body of suppressor (silencer), provides a short length of the Picatinny rail that can host either a laser aiming module or light. The screw-on suppressor is available in two versions – training and “operational”. Training suppressor is of traditional design, with set of circular aluminum baffles inside. “Operational” suppressor has a set of rubber baffles which close (seal) the bore after each bullet, further decreasing the noise of firing. Rubber baffles shall be replaced after specific number of rounds fired to keep performance. Thanks to short perforated barrel VP-9 pistol is effective even with standard 9mm ammunition (which is supersonic under normal circumstances), but with special subsonic ammunition it is even more silent – typical noise level with standard 9mm ammunition is about 129 dB and with subsonic ammunition it is about 125 dB.