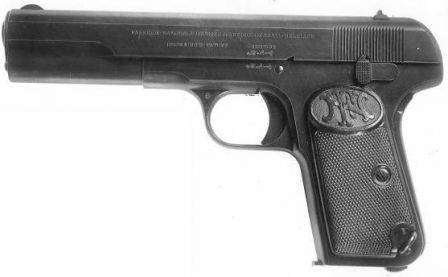 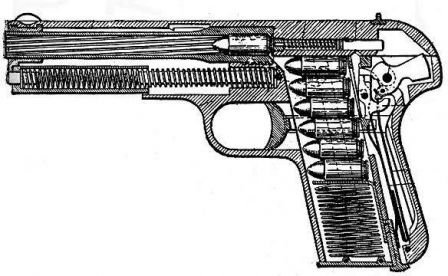 The FN Browning M1903 Pistol is the second production model blowback operated pistol ever made. It was of course designed by the famous American arms designer and celebrated genius John Moses Browning. He invented it in 1902 and patented it in 1903. It is also known as the Browning No.2 pistol, and this design represented a serious improvement on the older No.1 (FN – Browning M1900) Pistol.

At approximately the same time Browning developed the recoil operated M1900 for Colt. This design was also manufactured by the Colt Firearms Company in the USA as the Colt M1903 pocket pistol, chambered in .32ACP (7.65mm). Both FN and Colt produced this design until the 1930’s. In Europe, The FN M1903 became a favorite of the police, and was also adopted by several armies, including the Belgian, Dutch, Turkish and Swedish Armies, as well as the Imperial Russian Police.

It was manufactured in Sweden under license at Husqvarna Vapenfabriks from 1917 until 1942, as the 9mm M/1907. In the USA, the Colt m1903 became popular as a civilian self defense pistol, and was also issued to senior army officers and generals as a standard personal defense weapon. FN built slightly less than 60 000 M1903 pistols, and Husqvarna built another 94 000.

This pistol can rightfully be called the forerunner of most kinds of semi-automatic pistols in the world, in one or another respect. Significantly underpowered by modern standards, it was however, reliable, accurate and comfortable to carry and to fire. It also offered a much faster reloading procedure than any of its contemporaries in the field of military revolvers.

The Browning M1903 ( whether it was made by FN in Belgium or by Colt in USA, the design remains the same), is a blowback operated, semi-automatic pistol. The recoil spring was located under the barrel, as in most modern pistols. The single action trigger unit features a concealed hammer (Colt also produced similar models with open hammers). The non-pivoting trigger is somewhat similar to the latter Colt/Browning M1911 trigger.

A manual safety switch is located at the left side of the frame, above the grip panel. When engaged, it locks the sear and the slide. It also locks the slide in the open position for disassembly. An additional automatic grip safety locked the sear unless the gun is properly held in the palm. The barrel is locked to the frame by several radial ribs. To disassemble the pistol, one must retract the slide, lock it open with the safety, then rotate barrel out of engagement with the frame, then remove the barrel and slide. An automatic slide stop (hold open) device was also incorporated, with the visible lever located at the right side of the frame, above the trigger guard. The single stack magazine is inserted in to the butt and locked by the lever at the heel of the grip. Military issue pistols also had a lanyard ring on the left side of the grip.