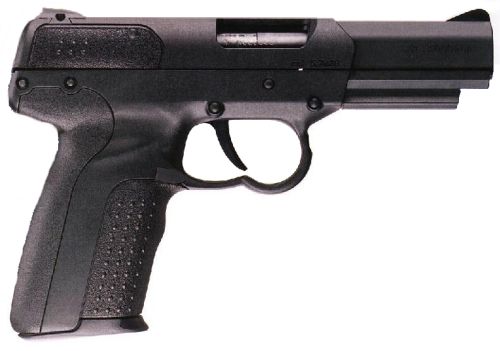 The Five-seveN Pistol was designed by the FN company (Belgium) as a complimentary sidearm for the P90 submachine gun. The P90 and Five-seveN share the same ammunition, the 5.7x28mm SS190 cartridge.

The SS190 ammunition looks like scaled down 5.56mm NATO round and boosts the 2.02 gramm (31 grains) pointed steel and alluminium core bullet to a muzzle velocity of 650 meters per second (ca. 2130 fps) from the pistol barrel. The key idea behind this ammunition and associated weapons is to provide good penetration against personnel protected by modern body armour, while keeping the weapons’ weight, dimensions and recoil at reasonable levels.

The Five-seveN is a delayed blowback operated, semi-automatic firearm. It featured a polymer frame with underbarrel acessory rail. The gun is available in two versions: Five-seveN Standard, intended mostly for military users, and Five-seveN Tactical, intended for Law Enforcement users who carry handguns as primary weapons.

The only difference between Standard and Tactical models is in the trigger type. The Five-seveN Standard features a Double Action Only trigger with long trigger pull and no external safeties; The Five-seveN Tactical features a Single Action trigger with short and light trigger pull and ambidextrous safety switch, located on the frame above the trigger. Both variants are striker fired, with internal firing pin safety. The sights are fixed, with optional night sights (luminous dot inserts) available.

This handgun is advertised as being capable of penetrating a standard PAGST vest at 300 meters and a standard CRISAT (kevlar + titanium) vest at 100 meters.

The Five-seveN is available from FN for government or law enforcement sales only.