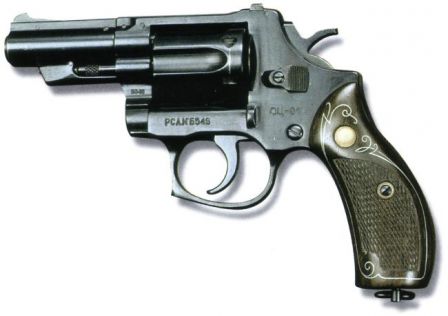 The OTs-01 “Kobalt” revolver, also know as “RSA” (Revolver Stechkina-Avraamova – after the names of the designers, Stechkin and Avraamov) was developed at the Central Design Bureau for Sporting and Hunting Arms (TsKIB SOO) in the city of Tula. This revolver apeared during the early 1990s along with several other Russian-made revolvers in an attempt to provide Russian police (Militia) and private security companies with a weapon that is as simple to use as possible. The RSA / OTs-01 was never accepted as a police weapon in Russia, but it became somewhat popular as an individual weapon among the private security companies, which are licensed under the Russian law to issue its personnel with firearms. It is also used by bank and armored truck security personnel in Russia. It must be noted that private sector companies are allowed to use this weapon only in 9×17 Browning Short (a.k.a. .380ACP) chambering, the 9×18 Mak version was developed strictly for Government use.

The OTs-01 “Kobalt” / RSA revolver is a conventional double-action revolver with exposed hammer and side-opening cylinder that holds 6 rounds. Since ammunition, for which this revolver is intended, is rimless, cartridges are loaded into flat steel clips prior to loading into the cylinder. Loading and extraction is performed using this clip, with all 6 rounds at once. This revolver can also be fired when loaded with loose cartridges (no clip) but in this case extraction would be problematic.