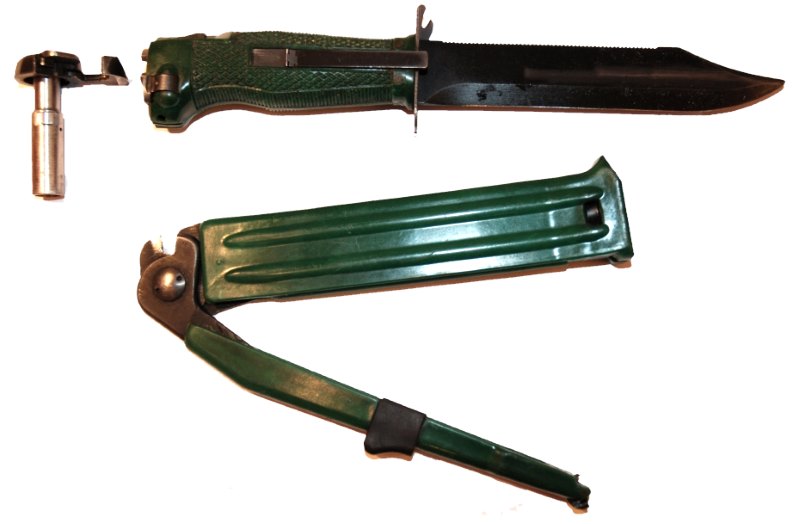 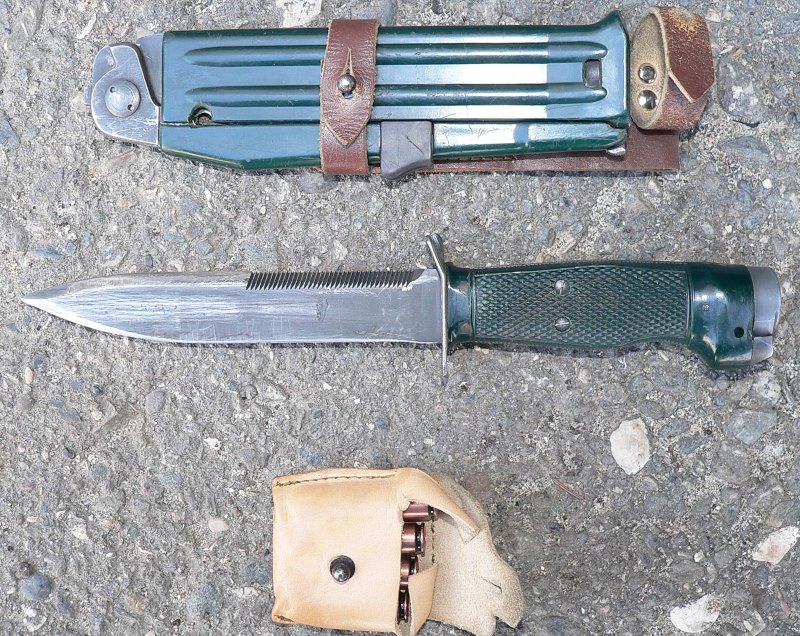 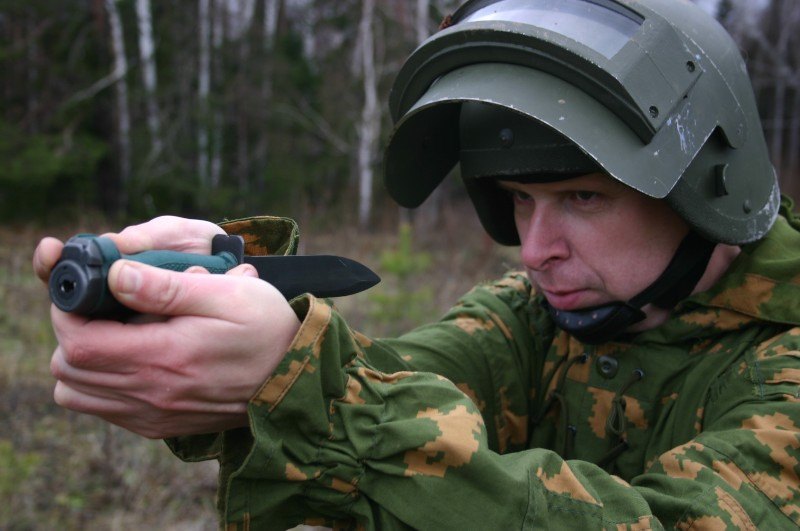 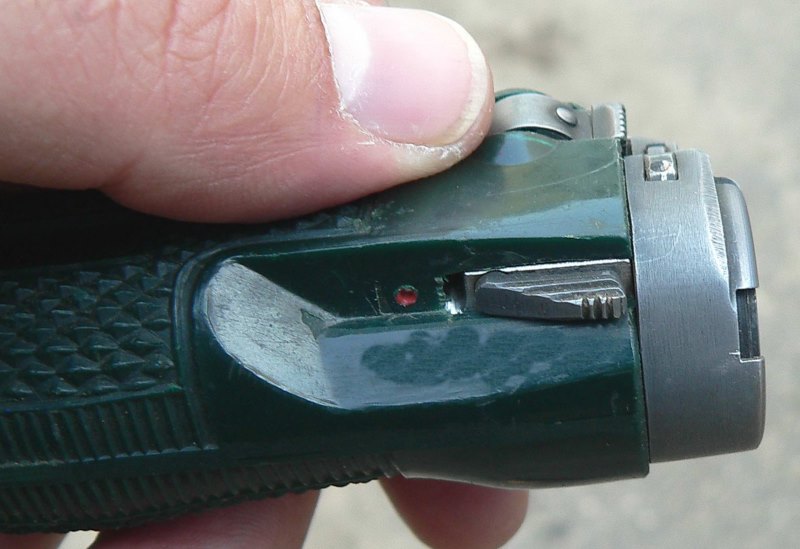 firing controls of the NRS-2 recon / scout shooting knife. Trigger is under the thumb, and manual safety is below 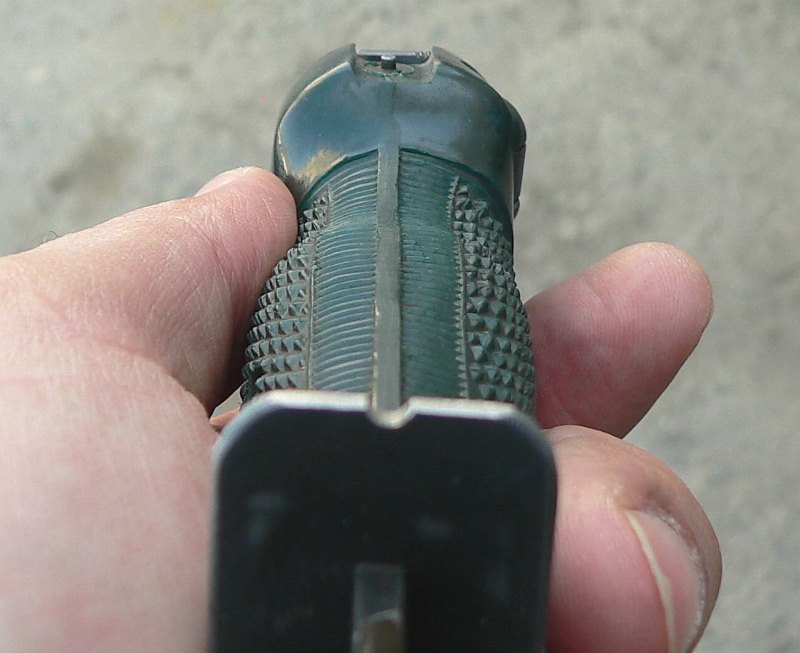 Extracting the fired SP-4 round from the barrel, removed from NRS-2 shooting knife grip

NRS (Нож Разведчика Стреляющий НРС) recon / scout shooting knife is one of most indigenous and most rarely used weapons of the Soviet and Russian Spetsnaz. Originally designed during 1970s as a close combat weapon for army reconnaissance units, it combines a combat knife with built-in single shot “pistol”, firing internally silenced, captive piston 7.62mm SP-3 ammunition. Later on, this weapon was redesigned to accept more modern and slightly more powerful 7.62mm SP-4 noiseless ammunition. This improved version, which also features redesigned blade, is known as NRS-2. Both versions were produced at the Tula arms factory (TOZ), along with non-firing combat/utility knives of similar design, known as NR and NR-2, respectively.

While NRS and NRS-2 might look very spectacular and “007-stylish”, in reality they are no more effective as any other combat / utility knife; firing of the NRS requires steady, two-hand hold and good nerve, because aiming of the built-in gun requires knife to be held with its blade pointing to the face of the shooter, sheath off. Reloading procedure is slow, and in most cases Spetsnaz personnel with authorization to issue and use NRS also has authorization and capability to use much more effective and accurate noiseless pistols in the same caliber, such as MSP or PSS. It must be noted that shooting NRS with the sheath off is less dangerous that it seems due to very low, almost nonexistent recoil. There is absolutely no flash and almost no sound. However, in real combat situations NRS is still noticeably less comfortable and accurate than any comparable pistol of more conventional design.

NRS is a fixed blade combat knife with hollow handle and plastic wrap-around grips. Single shot firing device fits into the hollow cavity of the grip, with barrel pointing in direction opposite the blade. Firing unit with single action trigger, manual safety lever and cocking lever is built into the grip. To reload the barrel, operator has to depress the locking lever at the pommel of the grip, rotate the barrel to unclock it and then pull it out. Once the barrel is removed from the grip, a fired case can be pulled out, using an U-shaped extractor cutout at the bottom of the guard. A great care must be taken during reloading, as fired internally suppressed (captive piston) cartridges contain hot powder gases inside after the shot. Once the fired case is out, a fresh round is loaded into the barrel, and the barrel is reinserted into the grip and locked in. To cock the internal hammer, operator has to pull up the cocking lever, located on the right side of the grip. Once the firing mechanism is cocked, a manual safety can be applied through the lever, located on the bottom right side of the grip, near the pommel (when looking in the firing direction). Trigger button is located above the manual safety. Fixed iron sights consist of a post-type front sight, built into the pommel of the grip, and a small U-shaped notch at the top of the guard. It must be noted that while gun can be fired with sheath on, the sheath would block the sight line.
Standard issue sheath features polymer-coated electrically insulated body with built-in wire-cutters. It is attached to the webbing or belt with detachable leather hanger.