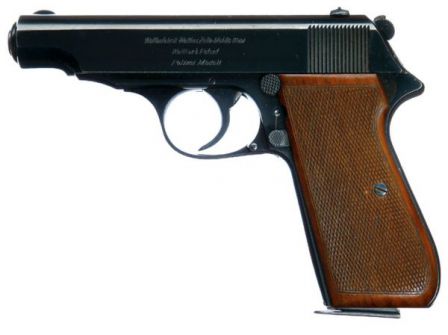 Experimental Walther "Police model" pistol which served as a prototype for PP; note that it has longer grip for 10-round magazine, and frame-mounted manual safety. 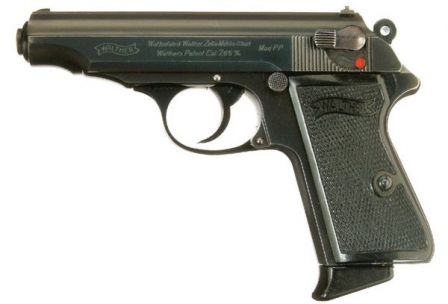 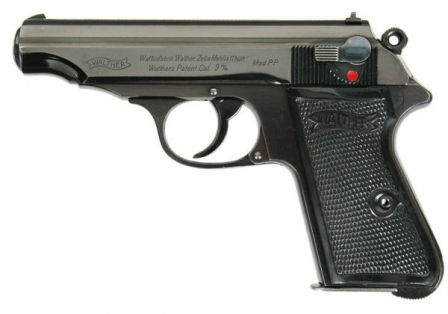 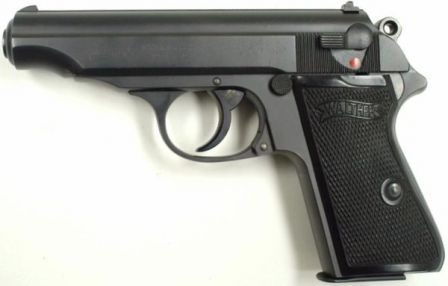 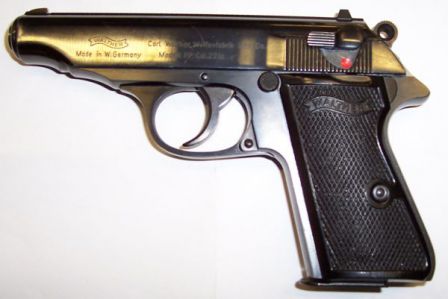 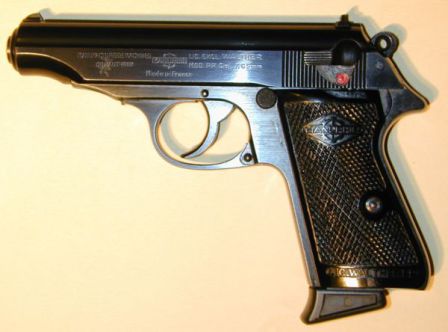 Post-war Walther PP pistol made under license in France by Manurhin. 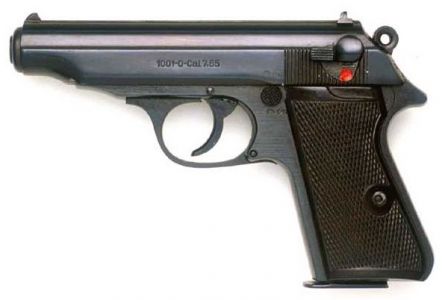 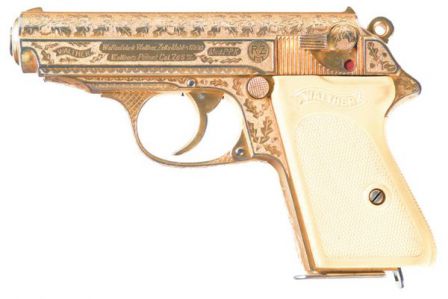 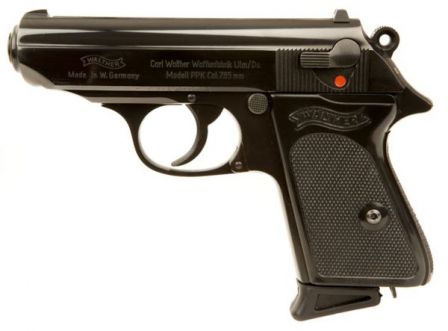 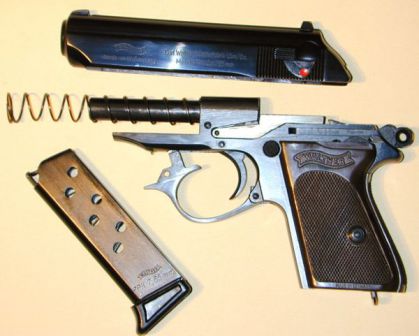 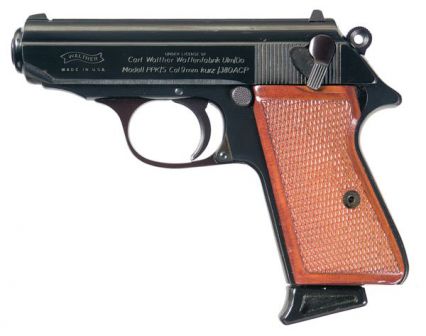 Walther PP pistols were among the most important developments of the inter-war period. Produced between 1929 and 1945 in significant numbers, these pistols, among with the basically similar but smaller PPK, were widely used as police and military guns in Hitler’s Germany. After the war, production of the PP and PPK pistols was resumed in France by Manurhin under German licence. Later on, production was returned to the re-established Walther factory in the city of Ulm ab Donau (pre-war Walther factory was located in the city of Zella-Mehlis), and these pistols have seen widespread use by civilians and police, as well as for personal defense by many non-infantry officers in several European armies. Very close copies of the Walther PP were manufactured after the war by East Germany, Hungary, Romania, Turkey and USA. At the present time, Walther PP, PPK/S and PPK pistols are manufactured in the USA by the Smith & Wesson Company under licence from Walther.
Walther PPK pistols are essentially similar to the larger PP pistols, except for the different design of the grip frame – while on PP pistols the grip backstrap is integral to the frame and grip panels are two separate items (left and right), on PPK pistols grip frame has a rectangular shape of a magazine channel and the backstrap is formed by the single-piece U-shaped grip unit, also usually made of plastic. While most PPK pistols were made with steel frames, in the post-war period Walther also produced some aluminum-framed PPK/L (Lightweight) pistols.
Also, there are Walther PPK/S pistols, which are a cross-breed between PP and PPK, combining the PP frame with shorter PPK-style barrel and slide. These pistols were designed to avoid limitations imposed by the American Firearms Owners Protection Act of 1968. This act, in particular, limited the minimum size of a “sporting purpose” pistols that are allowed to be imported in USA, and use of the larger grip frame allowed importing these pistols instead of smaller PPK pistols, banned from importation under this law.

The Walther PP is blowback-operated pistol with a fixed barrel, usually of all-steel construction. A few aluminum-framed PP pistols were built in Germany before the war, and stainless steel versions are manufactured in the USA under Walther’s licence since the mid-1980s. The trigger is double-action, with an exposed hammer and a frame-mounted manual safety/decocker; the lockwork is somewhat complicated in a typical German manner and has many small parts and pins. Sights are fixed, with the rear sight blade dovetailed into the slide. Magazines are single-stack; the magazine release button is usually located at the left side of the frame, just below the slide and in front of the grip panel. However, at least some PP pistols were made both before and after the war with so called “European-style” magazine release, located at the heel of the grip. Walther PP and PPK pistols are fitted with a loaded chamber indicator, made in the form of a small pin that protrudes from the rear of the slide (above the hammer) when a cartridge is in the chamber. This indicator is not present on .22LR models.
It must be noted that most of PP and PPK pistols were made in 7,65mm (.32ACP) caliber, with 9mm Kurz (9×17, .380ACP) running distant second. The .22LR version was made in some numbers, and so far most rare is the 6,35mm / .25ACP version, with very few guns made early in production history of both pistols.

How to field-strip (disassemble) Walther PP or PPK: 1) remove the magazine by pressing the magazine release button; 2) check that the chamber is empty; 3) pull the trigger-guard downwards, then swing it to one side to lock in the open position; 4) pull the slide all the way back, then raise the rear of the slide to the top, and off the frame rails; 5) carefully ease the slide forward and off the barrel; 6) remove the return spring from the barrel.
Reassemble in reverse order.