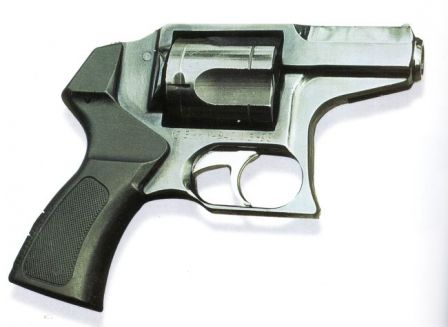 The U-94 “Udar” (“Strike” or “Blow” in Russian) Revolver was developed during the early 1990s at the famous KBP design bureau in Tula, Russia. It was intended primarily for police use as a concealed carry weapon with enhanced effectiveness against a variety of targets. This was acheived by developing a variety of 12.3mm rounds with various bullets (lead bullets for maximum stopping power, hardened steel AP bullets for maximum penetration against barriers, such as doors or car bodies etc). This rimmed ammunition was based on shortened 32 gauge brass shotgun shells, cut to the necessary length. For various reasons the police version didn’t catch on with Russian law enforcement, and a reduced power version, known as U-94S “Udar-S” was developed for private security companies. It used shorter cartridges with lead bullets only (no AP).

The U-94 “Udar” Revolver is a conventional double-action revolver with semi-exposed hammer (hammer head is accessible through the opening at the top rear of the frame for manual cocking or decocking) and side-opening cylinder that holds 5 rounds. The cylinder opens to the left, spent cartridges are ejected all at once when the ejector rod is pressed, fresh rounds are loaded one by one manually. This revolver has an unusual appearance, as a result of optimization for concealed carry and short-range use only. It has a steel frame and cylinder, and comes with polymer grips.