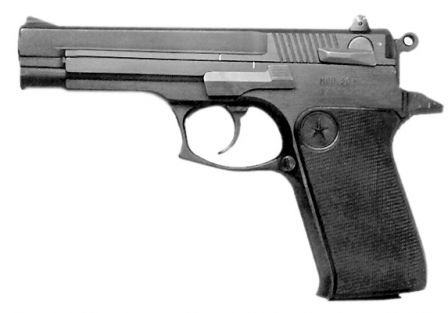 This pistol had been developed and manufactured in Spain by Star Bonifacio Echeverria SA company. The Star 30M appeared in 1990 and had been adopted as a service pistol by the Spanish army and police, as well as by Peruvian police.

Technically, the Star 30M is an updated version of the earlier Star 28M pistol. Star 30M is a recoil operated, locked breech pistol, that uses Browning-designed, linkless locking (High Power-type), with two lugs on the barrel and shaped cam under the chamber that interacts with slide stop axis iside the frame.
Star 30M features double action trigger with slide mounted ambidextrous safety that locks firing ping only, leaving trigger and hammer unaffected in "safety on" position, thus allowing the gun to be "dry fired" (however, this is unsafe and is not recommended). Star 30M also features magazine safety, that disables firing when magazine in not in position. Another safety feature is a loaded chamber indicator. Star 30M features internal slide rails (like the SIG P-210 or CZ-75). The frame and slide are made from steel (the aluminium-alloy frame version of the Star 30M is called Star 30PK and is somewhat lighter, as one can expect). The front sight is fixed, the rear sight is dovetailed and thus can be ajusted for windage.