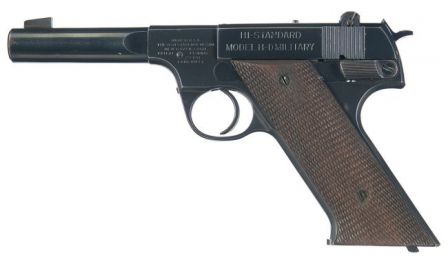 During the World War 2 American government established an Office of Strategic Services (OSS), an intellegence and special operations agency. Among other things, the OSS sent undercover agents to occupied and enemy countries and supplied friendly resistance forces with equipment and weapons. Many clandestine operations, planned and performed by OSS, required silenced weapons, and a request has been sent to develop such a weapon. During 1943, a group of engineers at Bell Telephone Labs designed several silenced semiautomatic pistols, based on various small-bore target pistols made by Colt and High Standard. By late 1943, OSS choose the modified .22 caliber Hi-Standard HD pistol, fitted with integral silencer, and issued a contract for production of this weapon to High Standard Manufacturing corporation. During 1944, High Standard produced several thousands of these pistols, officially designated as "model HDM", but better known simply as "OSS pistols". After the war, Hi-Standard HDM pistols were used by CIA and military special operations personnel during Korean and Vietnam wars, as well as in a number of Cold War operations. It is also possible that few Hi-Standard HDM pistols survived long enough to be used during the Gulf War of 1991. However, probably the most famous user of the Hi-Standard HDM pistol was probably the Francis Gary Powers, an CIA pilot who was shot down in 1960 over the Soviet Union, when conduction spy flight on U2 airplane.

High Standard Model HD (HDM) pistol is a semi-automatic pistol with simple blowback action and single action trigger. It is based on High Standard model HD target / practice pistol. The barrel of the HDM gun is ported, and is enclosed within the long integral silencer. The rear part of the silencer, which is located around the barrel, is filled with roll of a fine brass mesh, and the fromt part of the silencer contains several baffles. According to the available information, this silencer provided noise reduction by some 22 dB. The silencer unit can be removed from the gun for cleaning and inspection of the barrel by unscrewing it. The silencer itself, however, is made as a disposable unit and cannot be disassembled. Service life of the silencer is estimated at 200 rounds, but it was Ok for a gun that was fired very seldom, and live-firing practice was conducted with standard, non-silenced High Standard pistols which have very similar handling characteristics.