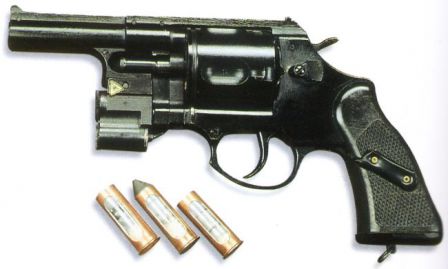 This monstrous revolver was developed circa 1993 by the Central Design Bureau for Sporting and Hunting Arms (TsKIB SOO) in the city of Tula. It was developed under the R&D program “Udar” (blow), initiated by the Russian MVD (Internal Affairs Ministry) which, at the time, was looking for a more versatile and powerful sidearm for ‘street’ police, to replace the old and venerable Makarov PM pistols. This new revolver was to have greatly enchanced stopping power with standard ammo (a lead bullet), and to have a significant penetration effect against steel plate with a special Armor Piercing round (steel pointed bullet). Other types of available ammo include less-than-lethal rounds with rubber bullets or tear gas. The new ammunition was developed by shortening 32 gauge shotgun shells to 40mm, and loading these with appropriate propellant and projectiles. It seems that the whole concept of the “Udar” R&D program, the large-bore police revolver, was met with little enthusiasm by actual users, and only a few OTs-20 revolvers were made during the mid- and late 1990s

The OTs-20 “Gnom” revolver is a conventional double-action revolver with exposed hammer and side-opening cylinder that holds 5 rounds. The only departure from ‘the usual’ in this revolver is that it has a smooth (non-rifled) crome-lined bore, and thus its accuracy is adequate only for very short-range encounters.