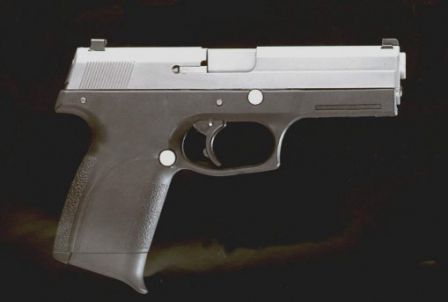 The FN Forty-Nine is a modern service handgun, intended primarily for police and security use.

It’s a recoil-operated, locked breech firearm that uses the improved Browning linkless locking principle. This weapon is striker fired, and unlike many other striker-fired handguns, such as Glocks, the Forty-Nine is a true DAO gun. Becaus of this, there is the availability of re-striking a misfired cartridge with just another trigger pull. The striker is completely at rest until the trigger is pulled, so the gun is safe. It has no external safety switches or decockers for simplicity and readiness of use. The main drawback of this system is the long and heavy trigger pull – almost 10 lbs (ca. 4.5kg).

The frame of the gun is made from black polymer, the slide, from stainless steel. The Forty-Nine also has accessory rails on the frame under the barrel, for quick and easy mounting of lazer designators and tactical lights.