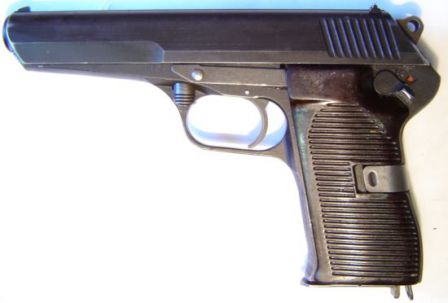 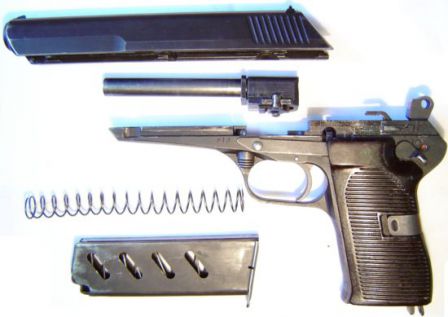 CZ-52 pistol (known in Czechoslovak service as 7,62mm Pistol vzor 52, or Vz.52 in short) was born from Czechoslovak army trials for a new military pistol, conducted between 1947 and 1951. Early trials requested pistol to be made in 9x19mm Luger / Parabellum. The basic design of the CZ-52 is attributed to Jan Kratochvil, who worked at CZ-Strakonice arms factory. This was a double-action, locked-breech pistol with an unusual roller-locking system, borrowed from the German MG-42 machine gun. Under pressure from the USSR Czechoslovakia standardized the 7.65×25 round of Soviet origin as its pistol and sub-machine gun ammunition, and the new pistol was redesigned for the “new” cartridge by Jiri Cermák, who worked at CZ-Uhersky Brod (CZ-UB) arms factory. During the redesign this pistol also lost its double-action capability (but retained decocking feature of its safety).
Introduced into Czechoslovak army service in 1952, this pistol was declared obsolete in 1982 with adoption of the 9mm vz.82 pistol, and most retired pistols were sold as surplus after 1987. The Vz.52 was not a popular weapon among its users, but mostly because of over-powered standard issue ammunition intended for sub-machine guns and loaded to higher pressures. With the standard, “pistol grade” 7.62×25 or 9mm ammunition it more manageable and may show good accuracy and an adequate life cycle.

The Vz.52 pistol is a short-recoil operated, locked-breech pistol of somewhat unusual construction. The barrel recoils linearly, without any tilting, which increases the accuracy potential (at least, in theory). Two rollers, located below the breech part of the barrel, are used to interlock the slide and barrel in the early stages of recoil. The rollers allowed to move laterally toward the axis of the gun, and this movement is controlled by cam-shaped cuts in the frame. When the barrel and slide are in battery, the rollers are extended from the barrel sideways and engaged in the respective cuts in the slide. Upon recoil, the rollers are withdrawn from the slide cuts following the cam-shaped tracks in the frame, thus unlocking the side from the barrel and allowing it to resume the reloading cycle. Another unusual feature is that return spring is located around the barrel, and its rear end is resting against special part, which is integral to the barrel unit but does not move upon recoil, being locked to the frame. The trigger is of the single action type, with an external hammer and a frame mounted, decocking safety. Yet another unusual feature (at least for a full-size service gun) is that while it has a slide stop, which holds the slide open when the last cartridge has been fired, the slide stop does not have a manual release lever. The only sure way to release the slide from being held open is to remove the empty magazine, pull the slide all the way back, then release it and let it slam home. One could try to push the slide stop lever (located above the trigger guard at the left side of the frame) with a finger, but this may or may not work, especially with wet or oiled hands. The grip panels are made from bakelite or plastic and held in place by a U-shaped spring clip. The sights are fixed, with the rear being dovetailed to the slide. Magazines are of single stack type, and the magazine release is located at the heel of the grip.
Manual safety: Lever at left side of the frame, behind grip panel. To set on safe: push the lever up; to disengage safety: pull the lever down; a red dot will appear on the frame. The safety blocks the action regardless of the hammer position, cocked or not. To decock the hammer: push the safety lever up from "safe" position, and hammer will fall. NOTE: do it with an empty chamber to avoid accidental discharges if parts in the safety mechanism are worn.

How to field-strip (disassemble) Cz-52 pistol 1) remove the magazine by pressing the magazine release button; 2) check that the chamber is empty; 3) push the safety lever up to decock the hammer; 4) pull down the serrated take-down knobs (located at the top of the frame, above the front parts of trigger-guard); 5) holding the knobs down, push the slide slightly forward and remove up and out of the frame; 6) while holding the slide upside down, use the front tip of magazine bottom plate (or a flat screwdriver) to move the roller cam (located below the barrel breech) forward, so the rollers will be retracted from the slide; 7) tilt the rear part of the barrel slightly up and pull it out of the slide; 8) remove the return spring from the barrel.
Reassemble in reverse order.