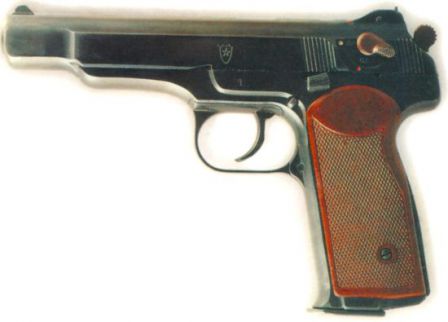 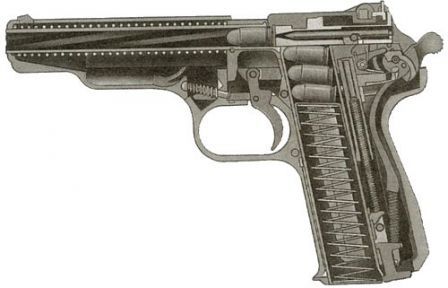 The Stechkin APS pistol was the result of many years of trial and error by the Soviet Army.

The development of large, selective fire military pistols started in the USSR in the late 1920’s. These were intended for military personnel in the role of personal defense weapons. However, over time this pursuit turned out to be fruitless and was dropped with the advent of WW2.

After the end of WW2, the idea was resurrected. The 9x18mm Makarov cartridge was then only newly introduced. In concert with this the Soviet Army requested a large, semiautomatic pistol, capable of controllable fully automatic fire and fitted with a detachable shoulder stock. Such a weapon, designed by Igor Stechkin in Tula, was adopted by the Soviet Army in 1951, along with the Makarov PM pistol in the same caliber.

The new pistol was designated as ‘APS – Automaticheskij Pistolet Stechkina’ (Stechkin Automatic Pistol). It was issued to artillery, tank and armored personnel carrier crews, RPG-7 teams in the infantry and front line officers. However, it was soon discovered that the APS, with its bulky and heavy holster / shoulder stock, was awkward to carry. It also and lacked the stopping power necessary for a military weapon. It was therefore gradually removed from army service and put into reserve storage.

During the 1970’s, however, small quantities of existing APS pistols were fitted with new, extended barrels with threaded muzzle parts. These pistols, designated APSB, were intended for SpetsNaz use and issued with quick-detachable silencers and detachable wire shoulder stocks.

In the turbulent 1990’s, the APS found new life in the hands of various special Russian Law Enforcement teams, such as OMON, SOBR and various VIP security and hostage rescue teams. The APS offered much better accuracy and larger capacity than the general-issue Makarov PM pistol.

APS was also capable of very good rapid-fire accuracy in semi-automatic mode, as well as full automatic fire for emergency close-quarter situations. At the present time, regardless of the advent of more modern and powerful pistols, such as the Yarygin PYa or GSh-18, the APS is still well regarded by Russian law enforcement. The reasons for this are that the 9x18mm ammunition is inexpensive, readily available and the weapon has good accuracy and low recoil. When carried these days, it is in various open-top ‘combat’ holsters, instead of the original clumsy and heavy holster / shoulder stock combination.

The APS is a simple blowback pistol, of all steel construction, with external hammer and double action trigger. A three-position safety lever, located on the slide, also acts as fire mode selector, allowing for single-shot or fully automatic fire. The slide itself is relatively long, which helps to slow the rate down and lower felt recoil. To further slow the rate of fire down to a controllable 600 rounds per minute, the APS features an inertial plunger-type fire rate reducer. This system essentially delays the action of the hammer by forcing it to activate (plunge) into a spring loaded weight in the grip, before activating the trigger mechanism.

The return spring is located around the barrel. Front sight is fixed to the slide, rear sight is adjustable for range, with settings for 25, 50 and the rather optimistic 100 and 200 meters. To further improve the long range and full automatic mode accuracy, a shoulder stock / holster can be attached to the grip. Early holsters / stocks were made from wood, more recently – of brown plastic.