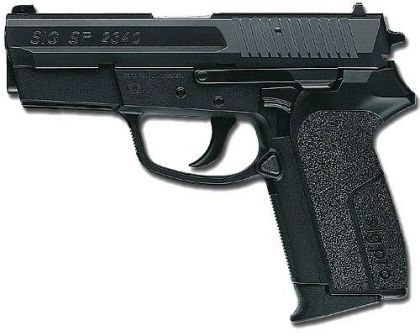 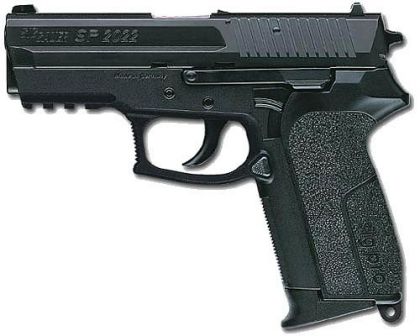 The SIG Pro pistol is another joint effort between two famous European arms makers, the SAN Swiss Arms (formerly known as SIG Arms) and the J. P. Sauer & Sohn of Germany. Originally developed as a .40SW caliber service pistol with modular design, it was first announced in 1998 as the SIG Pro SP 2340. About one year later, the 9mm version, designated the SP 2009, was introduced and entered production. The SIG Pro is used by the US Drug Enforcement Administration (DEA), as well as by number of other law enforcement agencies worldwide. In the 2003, the French law enforcement agencies (including Gendarmerie and Police Nationale) adopted a slightly modified version of the SP 2009. New version of SIG Pro, designated as SP 2022,  is to replace Beretta 92G and some older pistols. Total of 250 000 SP 2022 pistols are ordered by France.

The SIG Pro is a short recoil operated, locked breech pistol. It uses a fairy traditional browning cam-operated locking system. Barrel locks into the slide via enlarged ejection port. The frame is made from polymer, with detachable grip panels. Grip panels can be easily replaced and are available in several different sizes and shapes. The modular hammer unit can be installed in traditional DA or DAO versions. There's no manual safety on all SIG Pro pistols. Instead, SIG Pro pistols are fitted with typical SIG-Sauer frame mounted decocker lever, and with automated firing pin safety. The overall design is slightly different from earlier SIG-Sauer pistols such as P220 or P226, as there is no separate disassembly lever on the frame of SIG Pro, and the slide release lever looks quite different. The SP 2340 and 2009 pistols are fitted with proprietary accessory rail under the barrel, while SP 2022 is fitted with integral Picatinny rail. SP 2022 also can be equipped with detachable silencer. Fixed sights are dovetailed into the slide.