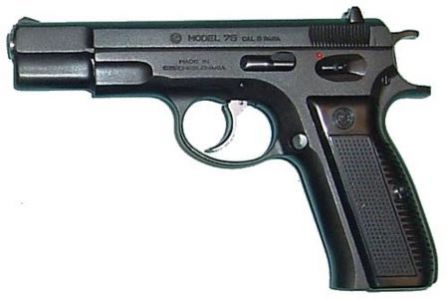 Original version of the CZ 75 pistol, easily distinguishable by the curved triggerguard and spurred hammer 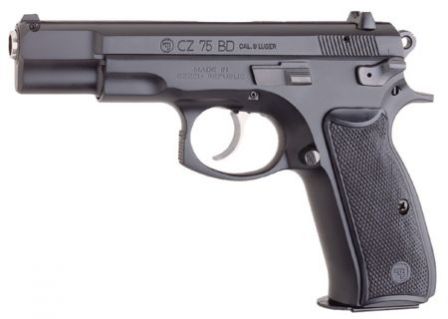 CZ 75BD pistol, with decocker lever instead of the safety CZ 75 Automatic, a selective fire version of the CZ 75B; note the spare magazine, attached as a front grip, and a lengthened barrel with muzzle compensator, which indicates the early model 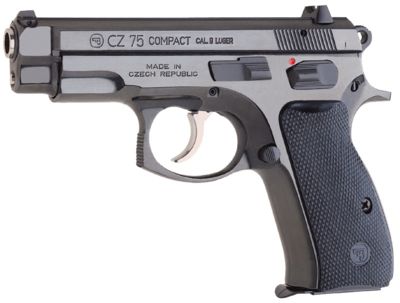 CZ 75B Compact, with shortened barrel, slide and grip 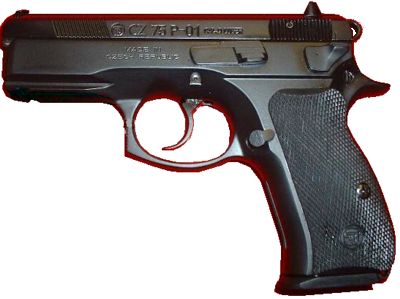 CZ 75 P-01, one of the most recent versions of the CZ 75, adopted by the Czech Police. Note the accessory rail under the barrel, compact frame, and a decoking lever instead of the safety. 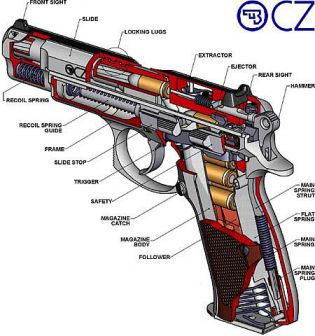 The CZ-75 pistol was developed by the Koucky brothers, who worked at the state-owned arms factory Ceska Zbrojovka in the city of Uhersky Brod (Czechoslovakia, now Czech republic). This full-size semiautomatic pistol first appeared in the 1975, and the production began circa 1976. CZ-75 was obviously intended for the export market. The CZ-75 accumulated best features from many preceding designs. Resulting pistol was aesthetically attractive, comfortable to handle and shoot, quite accurate and reliable in operation. Made by CZ in various versions and modifications, CZ-75 was also widely copied and cloned. Most popular of CZ-75 copies are (or were) made by: IMI (Jericho-941, Israel), Tanfoglio (TZ-75, TZ-90, T-95, Italy), Sarsilmaz (M2000, Turkey), ITM (AT-88, Swiss), Sphinx (mod.2000, Swiss), Norinco (NZ-75, China), Springfield (P9, USA).

CZ-75 is now in service with Czech police (in the form of compact CZ-75 P-01). It is also used by Turkish police, and by several police departments in USA. By opinions of most experts, CZ-75 is one of the best combat pistols in its class.

CZ-75 is a short recoil operated, locked breech pistol. It uses a fairy standard Browning locking system, with cam-shaped cut below the barrel, which lowers the barrel on recoil stroke. Barrel locks into slide with two locking lugs, located just ahead of the ejection port. The slide rides on the internal rails, machined on inside of the frame. This system, originated by the Swiss SIG P210 pistol, provides more smooth cycle and better tolerances, resulting in greater accuracy. In basic models, the double action trigger system with exposed hammer has a frame mounted manual safety, which allows for "cocked and locked" carry. Since the late 1980s, all CZ-75 type pistols are fitted with internal firing pin safety. Models with firing pin safety are indicated with "B" index, for example CZ-75B, CZ-75BD. All full-size CZ-75 have all-steel construction; several compact models, including CZ-75 P-01, have aluminum frames with steel slides.

There are several variations of the trigger system, available in various models. First is decock-only system (frame-mounted decocker lever, with no manual safety, in models CZ-75BD, CZ-75 BD Compact, CZ-75 P-01). Second is the Double action only system, with no manual safety and spur-less hammer (models CZ-75DAO). Third is the Single action system, with manual frame mounted safety, intended mostly for sport shooting under IPSC rules (CZ-75SA). In all versions, manual safety or decocking lever is located only at the left side of the frame, as well as the slide stop. The completely ambidextrous version of the CZ-75 is the CZ-85, described in the separate article.

The Semi-compact models of CZ-75 have the same frame as basic guns, but have slide and barrel shortened by 20mm (.78 inch); Compact models also have shorter grip frame, which holds only 13 rounds of ammunition (standard magazines will also fit, but will protrude from the bottom of the grip).

The CZ-75 P-01, which is a standard gun for Czech police since 2001, is based on the Cz-75BD Compact, but also featured an accessory rail under the barrel, which is usually fitted with tactical flashlight.

Probably most rare version of the CZ-75 is the CZ-75 Automatic, a selective-fire version of the basic pistol, which can fire either in semi-auto or in full auto, with rate of fire about 1,000 rounds per minute. The CZ-75 Automatic first appeared circa 1992, and is intended for special police and military forces. To help control the gun, a spare magazine can be fitted upside down into special holder under the barrel; it then serve as a front grip. Early models of CZ-75 Automatic were fitted with longer barrels with integral compensators; latest models have standard barrels.