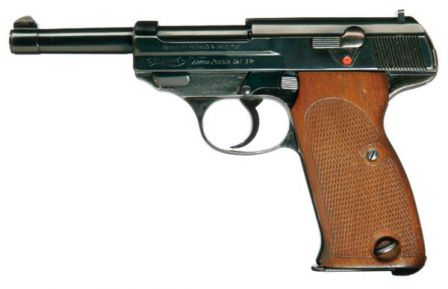 Walther “Armee pistole” or AP in short, a direct predecessor to the P38. Note that it has concealed hammer. 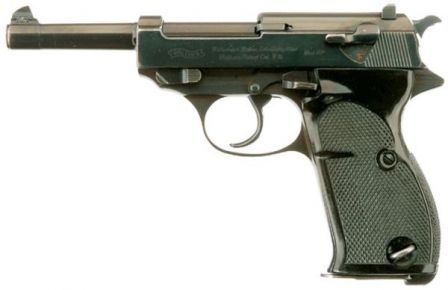 Walther “Heeres Pistole” or HP in short, an early commercial version, produced before its official adoption as P38. 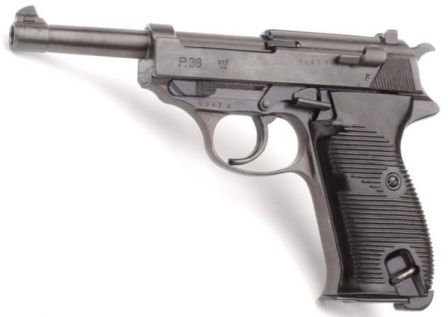 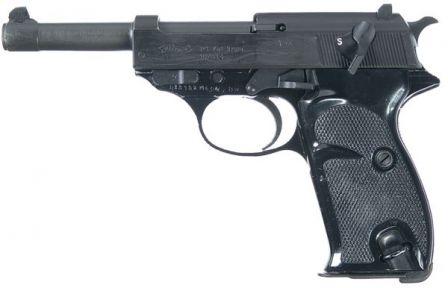 Walther P1, a post-war military version of P38 with an aluminum frame. 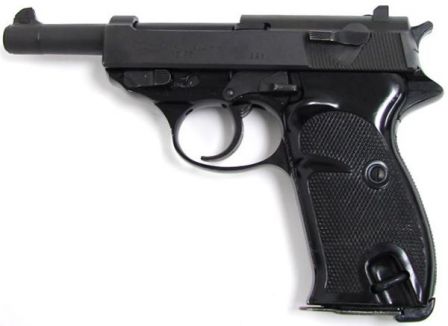 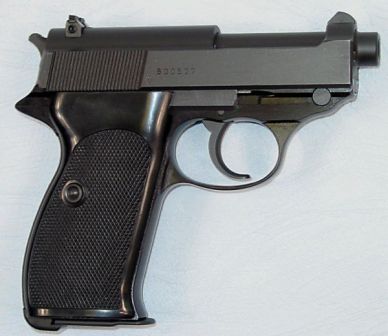 Walther P38K, a short-barreled version of P4 produced for KSK during early 1980s. 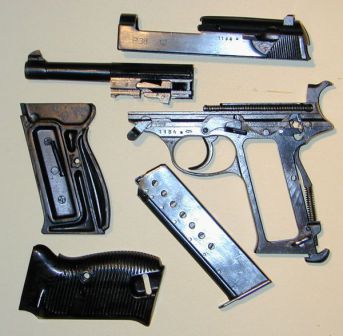 The Walther P38 pistol was developed as a military pistol for the German army (Heer) during the late 1930’s. It first appeared in 1938, and small numbers of the original HP (Heeres Pistole – army pistol) were bought by Sweden before the Wehrmacht adopted it. This was as the Pistole 38 and at that time the German armed forces took over all production of the guns.

During the war, P38 pistols were made by a number of factories, including the Walther factory itself. After the war, most of the ex-Walther company machinery ended up in France as part of war reparations. Because of this many of the post-war P38 pistols were actually built in France, by the Manurhin factory.

In 1957 the newly formed Bundeswehr (West German armed forces)  adopted a slightly modified P38 pistol. This one had a lighter aluminum frame and was nominated as the Pistole 1, or P1 for short. Commercial pistols were still manufactured under the original P38 designation.

Most of the post-war P38 pistols were made with aluminum frames. Only a handful of commercial pistols were made with steel frames. There were a couple of modifications of the P38, intended for police use, which appeared during the 1970’s. The first was the P4, the first pistol to conform to new German requirements for police sidearms. These requirements meant that the pistol must fire 9mm Luger, be simple to operate, and rely on mechanisms such as de-cocking instead of a manual safety.

Actually, the P4 was the P38 (or P1) with the barrel cut back by 25mm (1 inch), fitted with an automated firing pin safety and decock-only lever. Early P4 pistols were actually made using P38 components, including slides, and thus were marked ‘P38 IV’ instead of the more commonly understood “P4”.

Another, less well-known variation, was the P38K (Kurz, or ‘short’ in German). This version was made for some special users such as the KSK – an elite German Army counter-terror unit. This was a P4 (rather than original P38) with the barrel cut down at the front of the slide. It was intended for concealed carry. The front sight was mounted on the slide, as opposed to the full-sized model.

It must be noted that a similar model was produced in small numbers during WW2 for the Gestapo and other such organizations. Wartime Kurz P38’s differed from the post-war version by having a slightly longer barrel with the front sight mounted on the barrel. However, the service life of police derivatives of the P38 was much shorter than of the military P1.

Most P4 pistols were declared obsolete and sold as surplus during the 1980’s, while the P1 served until 1995. The last commercial P38 pistol was manufactured in the year 2000.

The Walther P38 is a short-recoil operated, locked-breech pistol. The barrel is locked to the slide using a wedge-shaped locking piece, which can tilt up and down below the barrel. This is while it follows the inclined surfaces on the frame. When the barrel and slide are in battery, the locking piece is in its upper position, and its lugs securely lock the slide to the barrel.

Upon recoil, the locking piece drops down and out of the engagement with the slide, unlocking it and allowing it to recoil and complete the reloading cycle. Because of its short slide, the P38 has two captive return springs, located on either side of the frame and inside the slide.

With time it was found that the aluminum frame developed cracks in the most highly stressed area, where the locking piece and the barrel were slamming against it on recoil. So the frames of late production pistols were reinforced with the addition of a hexagonal cross-pin made of steel. The trigger is double-action, with an exposed hammer and trigger bar (the link between the trigger and sear) unusually located outside of the frame at the right side. The standard safety also acted as a decocker, and was located at the left side of the slide.

On the P4 pistol, the slide lever retained only the decock function and, once pressed and released, automatically returned to the fire position. P4 pistols were also fitted with a firing pin block safety. Magazines are single-stack, with the magazine release located at the heel of the grip. The sights are fixed. P38 pistols were also fitted with a loaded chamber indicator in the form of a small pin that projected from the rear of the slide, above the hammer, when a cartridge was loaded into the chamber.

How to field-strip (disassemble) Walther P38:

While P38 pistols were in some aspects revolutionary in their design and concept, the post-war P1 versions were less than popular in the Bundeswehr, deserving the unofficial moniker of “eight warning shots and one aimed throw”.

Also, these pistols showed the historical German obsession for unnecessary over-complication of design. For example, the P38 pistol had eleven springs (mostly very small ones) – approximately twice that of the older P08 Luger pistol it replaced in service. It also had plenty of tiny parts and pins that were easy to lose during full disassembly, and a firing pin of intricate shape that broke easily.