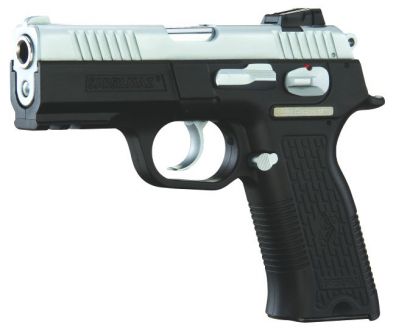 Sarsilmaz CM9 pistol  is manufactured in Turkey by company Sarsilmaz. This is a service-type pistol which is most suitable for police and security use, as well as for self-defense. CM9 pistols are based on the Bernardelli / Sarsilmaz B6 pistols, and combine full-size grip (for large magazine capacity and comfortable hold) with shortened barrel and slide (for better concealment). As with other Sarsilmaz pistols, such as Kilinc 2000, CM9 pistols are made from quality materials (forged steel and polymers; manufacturer states service life for this pistol for at least 25,000 rounds) and with fine workmanship.

Sarsilmaz CM9 pistols are short-recoil operated, locked breech semi-automatic pistols that use modified Browning-type action with tilting barrel. The barrel is locked to the slide by a single lug, which engages the ejection port. Frame of the pistol is manufactured from durable, hight strength polymer, slide is manufactured from forged steel. Trigger is of traditional double action type, with exposed hammer and automatic firing pin block safety. Ambidextrous manual safety levers are conveniently located on the frame, above the pistol grip, and lock the hammer and sear in lowered or cocked positions. Sarsilmaz CM9 pistols use double stack, single-feed high capacity magazines which hold 15 rounds, magazine release button is located at the base of the trigger guard. CM9 pistols are produced with fixed or adjustable sights which are dovetailed to the slide. Front part of the frame is shaped to provide integral Picatinny rail for accessories such as laser aiming modules or tactical flashlights.