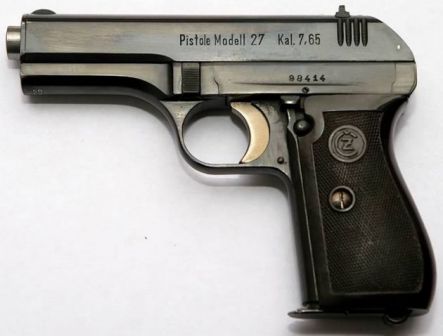 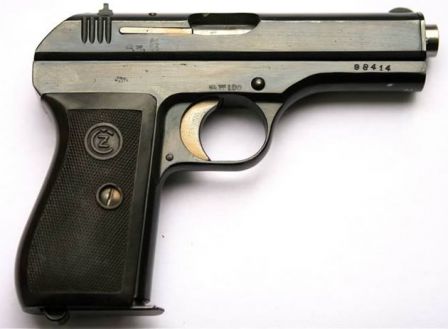 The CZ-27 pistol was developed in around 1926 by Czech arms designer Frantisek Myska in an attempt to produce simplified version of the CZ Vz.24 pistol, chambered for less powerful 7.65×17 SR Browning ammunition (also known as .32 ACP) and suited for police and security use. It was put into production in 1927, at arms factory in Praha. Until the appearance of the famous CZ-75 pistol, the CZ-27 was one of the most sucessfult handguns produced in Czechoslovakia, with well over 500 000 guns of this type produced between 1927 and 1951. During the German occupation of Czechoslovakia it was manufactured for German armed forces and police as Pistole modell 27, or P.27(t) in short. It was extensively used by Czechoslovak police and security forces, and widely exported to many parts of the world.

The CZ-27 pistol is a simple blowback weapon. The barrel remains stationary when gun is fired, but can be easily detached from the frame during disassembly. To unlock the barrel, one has to pull the slide back and then rotate the barrel until it is free to move forward. The return spring is located below the barrel, around its own full-length guide rod. The firing mechanism utilizes an exposed hammer and a single action trigger. Manual safety is located on the left side of the grip frame, behind the trigger. To engage the safety (turn it On, set gun on safe) operator has to push the lever down until it locks there, blocking the trigger and the sear linkage. To disengage the safety (turn it Off, make gun ready to fire) operator has to push the small button, which is located just below the lever.Feed is from detachable box magazines, holding 8 or 9 (depending on the period of manufacture) rounds of ammunition in a single stack.