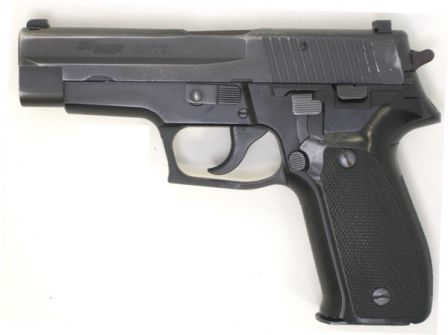 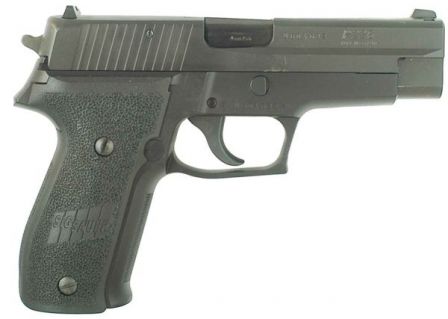 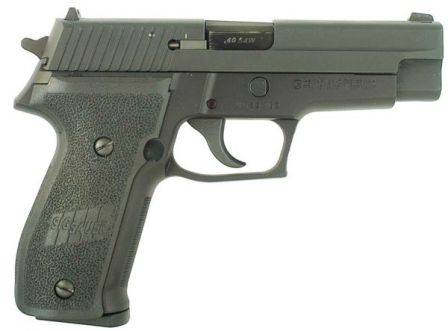 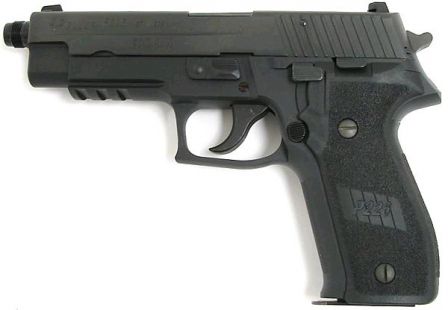 SIG-Sauer P226 “tactical” of recent manufacture, with Picatinny-type accessory rail and extended barrel, threaded for use with sound suppressor (sliencer).

The SIG-Sauer P226 pistol was developed as an improved, high capacity version of the P220, especially for the US XM9 trials of 1982-84.

The P226 was one of just two pistols that passed all of the technical requirements for these trials. At the last moment though, it lost to the other design, the Beretta 92SB-F, on the basis of overall cost. Despite this, the P226 quickly became one of the most popular service pistols, being used by police, military and security forces, as well as by many civilian shooters around the world.

Initially available only in 9mm, it was subsequently adapted to .40 S&W and .357 SIG calibers, which are extremely popular in the USA. In fact, the P226 was the first pistol to be chambered for the .357 SIG, a high velocity, high penetration 9mm cartridge, preferred by many American highway patrol services as well as by the US Secret Service.

The SIG-Sauer P226 is basically the same as the SIG-Sauer P220 pistol, except for a slightly different shape and double-stack magazines of greater capacity. It’s available in a number of versions, for instance: Tactical, Tactical Operations, Navy, Equinox, ST, Sport Stock, Elite, Combat.. just to name a few. The P228 and P229 are also essentially compact versions of the P226.

It’s available with standard aluminium or stainless steel frames and with or without a Picatinny rail. The trigger system is either a typical SIG-Sauer double action arrangement with a frame-mounted decocker and automated firing pin block; or a double-action-only setup without decocker.

9mm and .40/.357 versions of this pistol also may differ in the design of the slide – while 9mm pistols may have a stamped steel slide, larger caliber pistols have heavier slides, machined from a solid bar of steel.

Manual safety: None – decocking lever at the left side of the frame, in the cut of the grip panel.