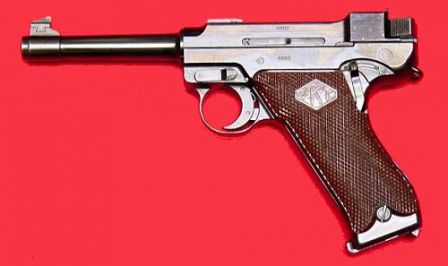 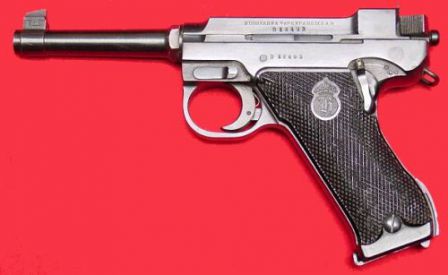 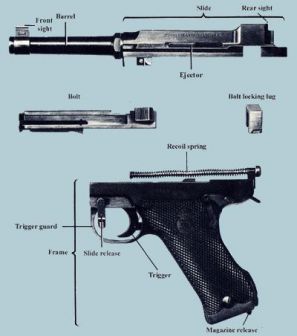 The L-35 pistol had been developed by the Finnish designer Aimo Lahti and manufactured by Finnish company VKT from 1935 until 1985 or so. It was adopted as a standard sidearm for Finnish army in 1935. In 1940, Sweden purchased a license for Lahti pistol, simplified it and began production as a Husqvarna M/40 pistol. Due to simplification and poor quality of steel used in M/40, these guns tended to crack when fired 9mm "submachinegun" ammunition, and also M/40 were less reliable than original L-35s, so in the 1980s almost all M/40s were recalled from military service and replaced by older m/07 pistol (licensed Browning M1903 pistols) as an emergency feature. Later, Sweden forces adopted the Glock 17 as a standard service sidearm.

Techically, L-35 is a recoil operted, locked breech pistol. It uses short recoiling barrel with barrel extension of rectangular cross-shape. Inside that extension the bolt is located, also of squared cross-section. Bolt and barrel extension are intrlocked by wertically movable locking lug, which is cammed out of engagement when hitting the frame after a short recoil. The L-35 is a concealed hammer fired, single action gun, that featured manual safety at the left side of the frame. On the top of the barrel extension there is a loaded chamber indicator. another intersting feature of the L-35 is a bolt accelerator, which gives to the bolt additional energy to operate in extreme cold or dirt.

The Husqvarna M/40 was diifferent from the L-35 in some respects: first, it has larger trigger guard; second, M/40 had no loaded chamber indicator; third, and most important, M/40 lacked the bolt accelerator, which lead to the decreased reliability. The backstrap of the grip of M/40 also had been cut for removable shoulder stock / holster. The M/40 pistol had been manufactured during the 1940-1946, with total of less than 100.000 pistos.

On the other hand, the original L-35 was extremely reliable and robust gun, with the only drawback of being slightly too heavy.