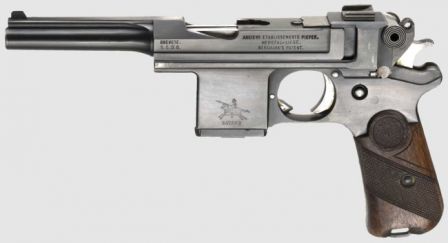 Bergmann Bayard model 1908 pistol, made in Belgium by Pieper. 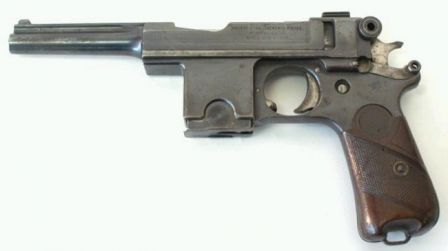 Bergmann Bayard model 1910 pistol, made in Belgium by Pieper. 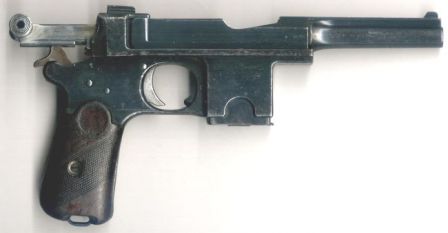 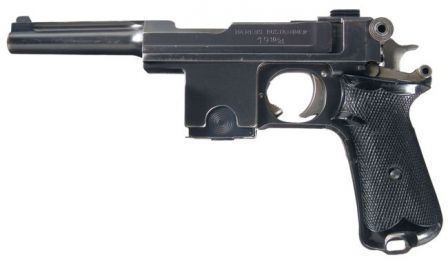 Bergmann model 1910/21 pistol, made in Belgium and later upgraded in Denmark.

Theodor Bergmann was a German businessman, who got himself involved in the development of automatic arms right at the beginning. As early as in 1894 he brought up a semi-automatic (blowback operated) pistol, designed for him by designer Louis Schmeisser. This pistol, along with a number of subsequent models, met with little success, but around 1903 Bergmann brought to the market a completely new pistol, with recoil-operated action based on the machine gun, designed by the same Louis Schmeisser. The Bergmann Model 1903 pistol, also known as Bergmann “Mars”, was chambered for a potent (by the standards of the time) cartridge, known as 9×23 Bergmann. Spanish military tested this pistol and ordered several thousands in 1905. In Spanish service the new 9×23 Bergmann cartridge became known as 9mm Largo, and the name stuck. Due to the very limited production capabilities of the Bergmann’s own company, he subcontracted production to the Belgian company Societe Anonyme Anciens Establissments Pieper (AEP), which sold its guns under trade mark “Bayard”. In 1908, Pieper produced an updated version of the pistol, known as Bergmann Bayard model 1908 pistol, and in 1910 came the definitive version of this gun, known as  Bergmann Bayard model 1910. The Model 1910 pistol was adopted by Danish government, and several thousands of these pistols were built by Pieper for Danish army prior to the outbreak of the WW1. After the start of WW1, production of this pistol has stopped due to the occupation of Belgium, and it was never resumed later there. After the war, Danish government ordered several thousands of these guns to be built at state arsenals, and in 1921 all Danish pistols still in service were updated to the Model 1910/21 standard, and served in this modification until 1946.

Bergmann Bayard model 1910 pistol is a short recoil operated weapon. It uses short recoil system in which the separate bolt rides inside the rectangular barrel extension. The bolt protrudes from the barrel extension at the rear, and has two round knobs for manual retraction. Bolt locking is achieved by a vertically sliding block, which is located in the barrel extension. In the forward position of the moving parts, the locking block is forced upwards by the step in the frame, and engages the cut made on the underside of the bolt, securely locking it to the barrel extension. Upon recoil, the slope in the frame allows the block to fall down slightly and to leave the recess in the bolt, thus unlocking the bolt. The feed is from detachable box magazines, which hold cartridges in two vertical staggered rows. Magazines can be reloaded either when detached from the gun, or while in-place, using the charger clips through the ejection opening at the top (with the bolt locked back). Magazine housing is located in front of the trigger guard. Magazine release is located inside the trigger guard, at its front. Trigger is of single action type, with exposed hammer and a manual safety lever, which is located to the left of the hammer. To engage the safety, this lever must be turned up and forward.