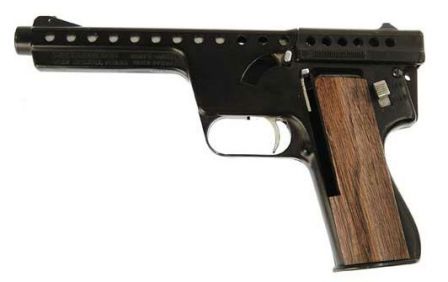 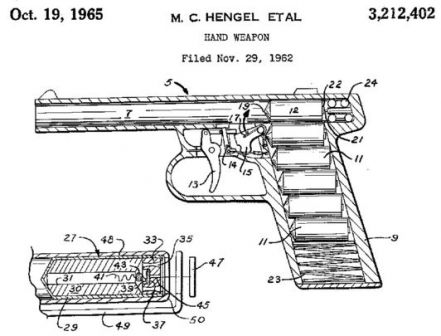 During the early sixties a small company MB Associates, founded by Robert Maynard and Arthur Bill, brought up a new weapon that was intended to revolutionize the world of small arms. Known as Gyrojet, it was sort of hand-held, multi-shot rocket launcher. It was advertised as a silent and capable to fire under-water, but in real life Gyrojet weapons turned out to be extremely unreliable and dramatically inaccurate; also, these weapons were rather ineffective at point-black distances, gaining its full power only at ranges of about 40-60 meters (yards). Few of the Gyrojet "pistols" made its way to the jungles of Vietnam in the hands of US military officers, who bought them at their own funds, but no successful reports ever appeared, and by late sixties the Gyrojet project was doomed.

Gyrojet weapon was one of the rare attempts to develop an entirely different weapon with some unique properties. This weapon tried to achieve several goals, including the low noise of firing and underwater fire capabilities, along with significant firepower and penetration. In doing so, it was far from any conventional firearms; in fact, it was a hand-held, multi-shot rocket launcher that fired "armor piercing" projectiles, made from steel and with pointed nose. Each projectile contained its own rocket engine and means for stabilization – either in the form of retractable fins or in the form of inclined jet nozzles which forced the missile to rotate, and thus provide gyroscopic effect for stabilization. Each rocket "motor" burned for about one tenth of a second; maximum velocity of about 380 meters per second (~1250 fps) was achieved at ranges about 20 meters from muzzle, while muzzle velocity was as low as 30 meters per second (~100 fps). Because of that slow acceleration the Gyrojet was almost useless a weapon at short ranges, within 5-7 meters. Another problem, inherent to this weapon, was poor reliability (even in ideal conditions this gun was to misfire about once in every 100 rounds; in actual life it did so much often than that). Add to this very poor accuracy because of insufficient stabilization of projectiles during early stages of trajectory, and you get more of curiosity and collectible piece rather than combat weapon. Probably the only plus of this weapon was that it indeed was more or less silent – when fired, it produced a short hiss, sort of a pierced tire sound, clearly different from any typical gunshot. However, it deserved its place in the history of small arms as one of the very rare attempts to made unconventional combat weapons that worked, even only to some extent.
Also, it must be noted that Gyrojet weapons were made not only as "pistols" but also as "carbines" as well, with longer "barrels" and shoulder stocks. Furthermore, there were two "marks" of Gyrojet. Major difference between Mark 1 and Mark 2 weapons was caliber of projectiles – original Mark 1 weapons used 13mm rockets, while later Mark 2 weapons used 12mm rockets to conform with US gun laws that set maximum legitimate caliber for civilian weapons as 0.5 inch (12.7mm).

The Gyrojet launchers were made in the form of a large pistol (or carbine). Frame was made from aluminium alloy, with perforated "barrel" which served as a launching guide for rockets. Up to six rockets were stored in integral, single stack magazine located in the grip; magazine was loaded from the top, through the slide-open cover. After loading, top rocket remained in the "barrel", resting against stationary firing pin, set into the rear of the barrel tube. Once trigger is pressed, it releases the hammer, which rotates back and hits the nose of a rocket, pushing it toward the stationary firing pin. Primer in the base of a rocket ignites the rocket charge, and sends the projectile accelerating down the "barrel" tube. This movement cocks the hammer and also frees the space for next rocket to rise from magazine into firing position. To provide necessary means for cocking the hammer for first shot, it has been fitted with side extension that projected outside of the frame from the curved cut on the left side of the frame. Manual safety was fitted at the left side of the grip, and magazine follower also had a projection that allowed to lower it manually for loading.